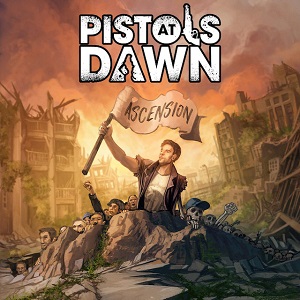 Pistols At Dawn “Under the Surface” (SINGLE)

Like a ripping desert rock riff that has somehow found its way into the 21st century without the likes of Josh Homme getting his hands on it, “Keep Me Guessing” soars through the sonic atmosphere with more muscle than I knew Pistols at Dawn were capable of breaking off. It would seem that this act is sporting much more than a simple rock n’ roll profile in their new album Ascension, and with songs like “Keep Me Guessing” and the stately arranged “The Truth,” they’re putting all of their stock in an oft-forgotten brand of brutality that sounds especially refreshing to come across this year.

“For You” is probably the most linear composition in Ascension, but I wouldn’t quite say that it has more of a punky aesthetic behind its drive than any of the other material here does. Truth be told, I don’t get a lot of punk influence in any of this music, but there’s undeniably an efficiency that makes Pistols at Dawn sound a lot less indulgent than their straight-up heavy metal brethren in the underground. “Dictator” could have been an industrial rocker back in the day, but this band isn’t giving it enough of a plasticized backdrop to really exist in that genre; it’s almost as if it’s too organic to be predictable.

When I first listened to the “Boys of Summer”-influenced intro of “Get Away,” I couldn’t help but get hypnotized by the fusion of old school framework and a very new school melodic foundation that feels like this band’s and this band’s alone in terms of artistic ownership. They’re able to do so much with a familiar pattern in this tracklist, and yet their most pummeling, bottom-end-supported works like “Gravity” stand out with a sonic exuberance that hasn’t existed on the FM dial for far too long now.

If there’s one song on Ascension that’s worth checking out in any situation, it’s undisputedly the lead single “Under the Surface,” which feels like every bit the mammoth piece this band is capable of producing when there’s nothing to stop their creative wills from coming together. “Keep Me Guessing” is similarly driven by its physicality, but I would never say that any of these songs sound too meaty to have the melodic elements they utilize so liberally. I don’t know how Pistols at Dawn got as tight as they did, but nevertheless, they’re one of the best acts in their scene at the moment.

Whether it be crushing harmonies ala “The Truth” or more abrasive hooks like the one we find nestled between the beats in “Under the Surface” or “Get Away,” Ascension has got something that is bound to get you feeling the rock n’ roll pulse this season. Rockers have been deprived of any consistent wealth on the mainstream end of the dial for a long time, but this is an era that’s starting to feel like a comeback time for musicians who like to make their melodies just a little heavier than the status quo allows – Pistols at Dawn among them.