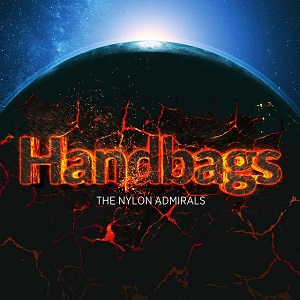 From its opening seconds, Handbags from The Nylon Admirals pushes itself into the absurd. The opening track “In A World” lends itself to being exactly what listeners think it will be, featuring the iconic movie trailer narrator voice (originally attributed to Don LaFontaine) speaking in movie trailer-isms via “In a world…” as a frantic electronic track speedily keeps tempo. The place setting is charming, unique, and engaging enough to get even the most casual listener involved with what’s to come in the next fifty minutes from The Nylon Admirals and company; the tongue-in-cheek approach is just silly and well-oiled enough to fully work as the opener for what will certainly be a cheeky album full of fun electronic hooks, bells, and whistles.

Standing tall at an impressively dense nine tracks, Handbags is a knockout achievement of a sophomore effort; going from a parody of movie trailer dramatics to a thirteen-minute cover of Mike Oldfield’s “Orabidoo” to close the record out, there aren’t many musical journeys like the one The Nylon Admirals are sending their audience on, and that’s a good thing. The education of The Nylon Admirals’ members seems to run deep within their influences and samples, and their self-made task of saving modern electronica from being watered down manages to stay afloat for all nine of Handbags’ entries.

Standouts, if we don’t include the aforementioned epic “Orabidoo,” are inarguably the tense, moody “Guillotine” (the most primed for sci-fi track you’ll hear all year) and dizzyingly melodic “Septillions.” Handbags as a whole beckons listeners into the world crafted by The Nylon Admirals, however, and every song functions as a mere cog in the greater machine-work of the album. Handbags takes listeners on a truly cinematic experience with its wall-to-wall offerings of vocoder-stuffed, synth-driven, sample-borrowing compositions — every track will match a mood and paint a picture directly into listeners’ minds.

The market for an album as assured and unique as Handbags feels incredibly hard to pin down. Where do you throw a project where a song pivots from an operatic yearning to 16-bit video game chiptunes directly out of your favorite Italian plumber’s musical arsenal? The answer is ultimately unknowable, but thankfully, The Nylon Admirals have pushed their pedal to the metal by releasing the LP on streaming services everywhere. There’s no doubt that an album as thought-out and effective as Handbags will find its footing and following, and The Nylon Admirals have already assuredly gained a new fan today through me.

Presenting themselves as instrumental music to ultimately match all moods is an impressive feat, but one listen to Handbags just goes to show that the proof is evident from the jump. It’s not an everyday release that will balance the goofy satirical compositions with work straight out of Hans Zimmer’s B-sides, but The Nylon Admirals make it feel like it could be such an occurrence. Handbags achieves everything it sets its heart out to achieve, and then some; it’s an impeccable work from The Nylon Admirals and there’s no inkling that the fans will react any way but in unanimous agreement.