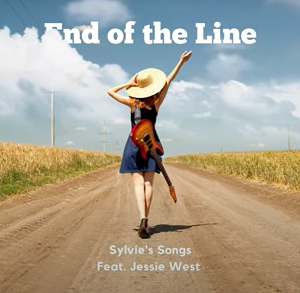 Austin’s Sylvie Abate is a songwriter and multi-instrumentalist with a clear grounding in Americana music far beyond average. Her new single “End of the Line” serves notice that her brand of soulful country is not just musically astute, however, but that she can call on a vocal powerhouse such as Jessie West, as well. West’s nuanced delivery during this song elevates its conversational lyrics to the realm of pure heart-felt performed poetry.

She has a sure hand for all of the above. Abate never allows the vocal or musical backing to slide into the sort of cliched country ballyhoo that has attempted to pass itself off as authentic for decades. “End of the Line” is a bluesy slow-burner more than anything else there are no cowboy hats, twanging Telecasters, or pedal steel breaks in this performance. It is, instead, a desolate and spartan Texas blues with West’s molasses yowl imbuing country grit into the cut.

She’ll win over listeners immediately. If it has been a long time since you’ve heard a self-identifying country vocalist, especially female, find the emotional stride that West achieves with seeming ease here, you feel like you’ve stumbled on an embarrassment of riches. How can something so deceptively simple prove to be such a rewarding listening experience?

Honesty. Abate and her songwriting never rely on the studio magic or technological trickery that others depend on to get by. More than that, they never view the genre as a vehicle that plays to their strengths capable of carrying them to would-be stardom. You get the sense, instead, t the entirety of “End of the Line” that Abate loves this type of music and she’s carrying out her vision for the song’s potential.

She’s expressing universal sentiments we’ve all experienced, however, in one form or another and even if she uses recognizable language, her superior vocal elevates it. Great singers such as West can make magic of raw materials and Abate’s writing for the song has provided her with the necessary tools she needs to win listeners over. We will definitely be fortunate as listeners if Abate and West collaborate again; the latter makes Abate’s song come alive on every line.

Indeed, she does. She does not do it through imposing her will on listeners, the song never attempts muscling in on you, and it does not attempt to steamroll you with sonics, ala volume. Abate, instead, wins us to her side through fundamentals as well. Vocalist Jessie West long ago mastered many of the vocal nuances and musical choices that make “End of the Line” tick like it does and it’s enjoyable to hear her gifts in full bloom.

This bloom will not soon fade. She is pulling her music from deep within and it finds perfect expression in the idioms of country and blues music. These forms remain capable of covering virtually any subject and retain the ability to capture an audience’s imagination. Sylvie Abate’s “End of the Line” provides us with inescapable evidence of that.