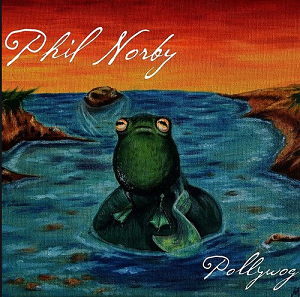 Americana typically experiences waves of respect from independent artists around the world, and more often than not, from some pretty surprising places in the pop music lexicon indeed. Take Phil Norby for instance; Norby is everything than an alternative pop/rock singer and songwriter should be in 2020. He has the guitar sizzle flanked with the occasional acoustic number and plenty of balladic, self-aware lyrical devices for audiences to connect to. What sets him apart is his appreciation of the model set forth by western-style Americana, and in his debut album Pollywog, we get to experience what I would deem alternative heartland rock in the best context I can imagine.

Lyricism always gets its emotionality from execution and tone, and in the tracks “Say “I Love You”,” “Face in the Crowd,” “Until You’re Gone” and “Long Goodbyes,” we’re reminded of this fact again and again. Norby isn’t someone who I had even heard of just a few weeks ago, and yet he straddles the poetic verses he dispenses here as adeptly as he does the beat of the drums. His timing is terrific while his adherence to a DIY ethos in his delivery shows a respect for the punk rock concepts that paved the way for his career in alternative music.

There’s not a spot of tension for us to get past in this tracklist, but that doesn’t lead songs like “Influencer,” “Battle Cry Lullaby” or “I’m Not That Man” to feel any less affective when we encounter them. Contrarily, the catharsis in both the music and the lyrics tends to push us along through the whole of the album, making even the darkest of corners here seem lit by the reflection of a silver lining. Again, Norby is rolling like a seasoned studio gunner, and never showing even the slightest hint of being in over his head here.

I absolutely love the amalgamation of heartland themes and grunge-inspired poeticisms in Pollywog, and to a great extent, it’s the reason why I fell in love with the Phil Norby identity right out of the gate this May. “Call Me Ishmael,” “Pearls,” even “Golden Years;” none of these tracks sound like anything a group like Drive-By Truckers or Timber could record, and it’s because this singer/songwriter isn’t playing a varied strain of country music. He’s on his own path, and frankly, aligning himself with experimental folk-rockers more than he is anyone else right now.

Though I was only recently introduced to his music, I’m already jonesing for more material from Phil Norby this month (and I seriously doubt that I’m the only one, critic or fan the same). Pollywog is a startlingly multilayered work that suggests a conceptual undertow for the man who breathes life into every one of its eleven songs, and hopefully it won’t be the lone release we hear from Norby before the year is out. He’s got a lot of momentum behind him at the moment, and if I were him, I’d get right back into the studio and start capitalizing on it.