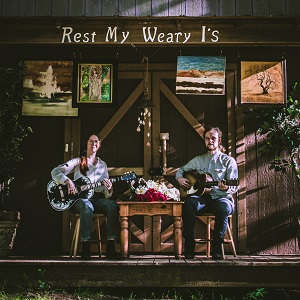 In Rest My Weary I’s, the new album from Alabaman folk duo Webster’s Wheel, folkies and fans of simplistic melodicism everywhere are almost certain to find solace amidst our stormy modern times this spring. 2020 has admittedly been a bit of a hit or miss year among independent artists, especially in western acoustic music, and this could be part of the reason why Rest My Weary I’s feels as special as it does. On the other hand, even if the last five months had been packed with top shelf content, something tells me an album like this one would still be a standout.

The vocal harmonies in “Hope You Enjoy It,” “Take a Stroll” and “Capital G” are absolutely phenomenal and clearly not the product of a lot of technologically sophisticated handiwork behind the mixing board. There’s so much chemistry between these two singers, and when they extend their melodic command into the fretwork here, it’s difficult to tell where one part of the synchronized thrust ends and another begins. Webster’s Wheel have a sleek, refined style about them that I’m interested in hearing more of, particularly when taking into account just how rare a find it is in any genre.

As far as depth of songwriting is concerned, there’s a lot of range throughout the album, with songs like “Finch In a Hollow” and the title cut standing out as some of the more profound in the tracklist. It’s hard to avoid getting lost in the sonic gaze generated by these two when they’re clicking like nobody’s business, but I would stop short of deeming Rest My Weary I’s the answer stultified surrealism enthusiasts have been asking for in 2020. There’s a postmodernity component to this record, but the aesthetic itself is hardly a centerpiece for Webster’s Wheel and their creative direction.

Though it pains me to admit this in print, I honestly haven’t heard a lot of folk LPs, EPs or singles this year that possessed the same colorful tonality that tracks like “Hike Up the Valley,” “Courting of More,” “Static Bloom” and “Glad I Prayed” enjoy. The vocals and the guitars are richly textured and never at war with one another for our attention. Thanks to the meticulous crafting of the song structures in this album, fluidity is never an issue for the music or the tracklist it’s arranged in. That’s not something that can be said about the chart-topping mainstream folk out right now (nor the underground rivals this album is up against).

Those who love melodically-pleasing acoustic music should consider Rest My Weary I’s to be required listening this season. Webster’s Wheel are a new band, having started jamming together as little as a year ago, but they clearly know exactly who they want to be and what kind of music they’re going to play together. I admire their charismatic swagger, and now, it’s just a matter of hearing them put it into action on a regular basis. Long story short – I’m expecting a sophomore effort sooner than later, and I’ll be eagerly awaiting its arrival.

User Rating: Be the first one !
Share
Previous Pollywog (LP) by Singer/Songwriter Phil Norby
Next All Of These Years (LP ) by Steve Thomas and the Time Machine