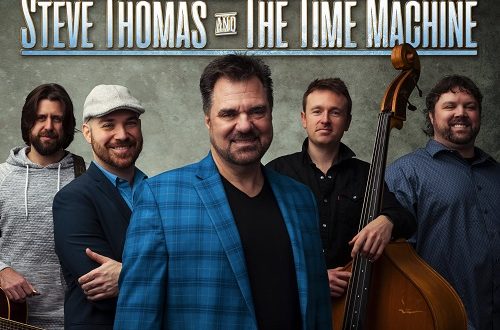 Carefully unfolding to an easygoing pace that emphasizes the understated tension in the lyrics, “Since Love Came Around” feels like a genuine statement piece in Steve Thomas & The Time Machine’s new album All Of These Years. All Of These Years sees Thomas and his band pulling out the big guns to deliver a record as indebted to the old school framework of bluegrass as it is contemporary country-pop music, but their efforts don’t produce something entirely alternative in style. In a nutshell, beneath the flashy external varnish here lies a puritan pastoral LP primed to make a big difference in the hearts of listeners this spring.

I absolutely love the string dueling in “Wonder Where You Are Tonight” and “The Rat Race.” In more ways than one, I think the interplay between the different instrumental components in All Of These Years does even more to shape the mood of the music than the lyrics do. This isn’t to run down the poetic emissions we come in contact with everywhere from “Down In The Wildwood” to “Far Far Cry,” but simply to acknowledge just how influential the melodic textures are in the aforementioned songs (and all of the album, really).

As much as I love the instrumentation in this record, the vocals are most definitely the centerpiece on more than one occasion here. “Daddy’s Twin I-beam,” “Lucky Man” and “We’ll Meet Again Sweetheart” have an achy emotional dimension that simply wouldn’t be accessible to us if anyone else was at the microphone, and though the compositional integrity for all of this material is as strong as it gets, execution effects the outcome more than anything else does in this kind of music. Steve Thomas & The Time Machine know the ins and outs of the recording process, and that’s obvious even at a distance.

The production quality this album enjoys is certainly a nice feature, but nothing in its contents feels or sounds overdone to the degree where I could chock up the credibility of the music to bells and whistles alone. Raw filtration works a lot better for songs like the title cut and “Rocky Road Blues,” and even if it’s a bit rougher around the edges than what country’s storied underground has been divvying out this year, that could be what makes this LP such a fetching and uniquely American listen. Steve Thomas makes no apologies for his brash charm here, and that’s partly what makes his performance so captivating from beginning to end in this record.

I just found out about Steve Thomas & The Time Machine a couple of weeks ago, but I’m very intrigued by the direction they’re taking their music in right now. Bluegrass has got a lot good players coming out of the woodwork at the moment, but if you’re looking for something a little more outside the box in style, this is about as choice an album as you’re going to find out of the underground this spring. In short – All Of These Years hits all the right notes without over-exploiting its simplistic principles, and that makes it a five-star release right now.