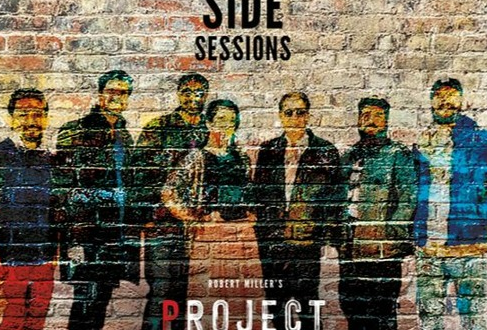 Divinely conjoined to an adjacent instrumental wallop and the mighty melody it produces in any given scenario here, Marilyn Castillo’s vocal is the flash point of the most powerful of harmonies in Project Grand Slam’s East Side Sessions. Castillo, along with Alex Blade Silver on sax, is one of the newest faces to join this Robert Miller-created band’s lineup, but her stylish persona meshes with her bandmates incredibly well in East Side Sessions. Project Grand Slam have come a long way in the last ten years, and in this LP, they bring everything they’ve learned along the way into the studio with them (plus a few fresh ideas as well).

Aside from Castillo’s singing, there are a lot of different elements within the music here to fall head over heels in love with right out of the box. The drums wash over the air around us with a percussive thrust unlike any other I’ve heard this spring in “I Wanna Be Your Girl,” and though tracks like “I’m Falling Off of the World” and “The Pardners” don’t sound anything like traditional jazz music, they’re as mathy as anything you’ll hear out of a conventional jazz act in 2020 just the same.

I really enjoy the sonic textures in “The Week,” “It Don’t Matter” and the album-opening “The One I’m Not Supposed to See.” One thing that listeners can always count on when picking up a Robert Miller-branded release is finding audiological integrity where other artists would simply apply filler, and on this end, East Side Sessions lives up to the pedigree of its forerunners brilliantly. There are a lot of ambitions in play throughout its tracklist, however, that tell me Miller is thinking bigger than ever at this juncture of his journey with Project Grand Slam. He’s not about to limit his expressive output, and in an age where minimalism rules supreme – in thought and aesthetics alike – his is an approach I’d like to see more of in general.

Overall, the production style employed in East Side Sessions is a lot more conservative in tone than what I had expected it to be, but this doesn’t filter the buoyancy (nor the grandiosity) of the material here at all. On the contrary, this conflict-filled formula makes songs like “Constable on Patrol,” “Tessa” and “Hey Jake” so much more compelling than they would have already been. Miller isn’t afraid to experiment in this LP, and I for one love the moxie he displays in all twelve of its tracks.

It’s a different sound than the one created with Ziarra Washington at the helm of the microphone, but if you love the experimental side of indie jazz, you really can’t go wrong with Project Grand Slam’s East Side Sessions this May. A product of organic harmonies and compositional hybridity, East Side Sessions is a provocatively unpredictable listen that doesn’t let listeners settle into a single groove for very long. That said, pressing stop before absorbing the dozen songs it features in their entirety is next to impossible to say the least.