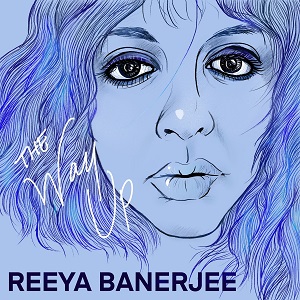 Reeya Banerjee “The Way Up” (LP)

Reeya Banerjee has a story that spans, nearly every corner of the U.S. Interestingly enough, she is actually of Indian heritage. The child of two New Delhi Immigrants, Reeya is also a second generation musician. Her Mother, a classically trained violinist, and her father, a pianist,  the former would introduce her to the work of The Beatles, early on in her life. The introduction to the forefathers of modern Rock and Pop, would be a pivotal moment of self-discovery and realization for a still developing Reeya.

At just 12 years old, Reeya lost her Mother to cancer, initiating what is nothing short of a lifelong battle with grief. After attending College, with a focus on Theater, Reeya would begin to focus on what she felt was her kismet, all along. At present, Banerjee is set to release an 8 song album, that could dually identify as either an EP or an LP. Every song on The Way Up, is between 3 and 4 minutes in length, and are polished and snappy, but not lacking in density. Reeya, describes the record as a major step in her psychological and spiritual ascension.

“The Magic Word,” opens the album, and gives us a clear idea of where things are headed. Banerjee has stated that with this record, she wanted to move away from the Classic Rock stylings, in which she felt she had been “inadvertently pigeonholed.” Judging from the tone and format of The Way Up, she has succeeded in doing just that. This record lies somewhere in between Alternative and Pop, with few surprises or risks, but enough artistry and musicianship to mostly compensate. “The Magic Word” is as effective of an opener as several tracks, would have been, though it does boast a clearly defined energy and sense of presence.

Desperate, but confident/convincing myself that I’m hanging by a thread/watch this rag doll/bouncing off the walls. “Rag Doll” is the 3rd track on The Way Up, and might just be its crescendo. With a chorus that is brilliantly composed, and a somewhat frenzied, yet masterful delivery by Banerjee, “Rag Doll” is a revelation. This track, truly captures the essence of what The Way Up, symbolizes, and is the type of song that instantly makes you take note of its performer and writer. Go out of your way to check this one out, as you won’t be disappointed.

The title track is exactly what it needs to be, here. Banerjee emerges from this record, with expanded credibility, as she walks it, as well as she talks it. “The Way Up” is all about the solidification of recovery and a declaration of strength. If this is a test/I’m gonna pass. “Need You There” is mostly defined by its unique guitar tuning/effect. It perfectly captures the melancholic yearning that Banerjee’s lyrics, illustrate. In some ways, she comes across as if Carole King, came of age in the post grunge era.

The artistic collaboration of Reeya Banerjee and Musician/Songwriter, Luke Folger, has proven to be a winning one. The Way Up is actually a supremely positive and uplifting work, that is sometimes camouflaged in despair and anguish. Reeya Banerjee has learned that sometimes, the only way up, is through, and there’s much inspiration to be found on this record. It’s the type of album that reveals a little more if itself, upon each listen, and contains much more gravitas, than one might initially presume. Reeya Banerjee is reminding us that there is still much to gain, even in the wake of considerable loss.