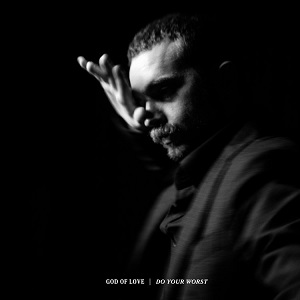 In the past couple of years, there’s been nowhere to turn but inward. Inside the house, inside your heart, emotions much like COVID numbers have been on a rollercoaster in the 2020s leading a lot of critics to start calling this decade the dawn of post-romantic surrealism, and listening to a record like Do Your Worst makes me want to agree with the branding. There’s something very cold and calculated about the very notion of swagger in this new album from God of Love, and yet its greater narrative seems to cackle at any concept that would leave emotions anywhere but at the center of the storytelling.

In “Take You Seriously,” “Black Beyond,” and “If Today Doesn’t Last” alone, God of Love makes a strong pitch for being one of the best indie acts cutting an LP out of the Texas underground this autumn, and it starts and ends with their sensible approach to pop song structures. The post-punk synthetic sludge is bleeding into a lot of balladic moments between “If Today Doesn’t Last” and “Where I Go At Night,” but it’s limited within a commitment to retro verse/chorus constructs give us consistency – and adrenaline – throughout the whole of the album.

Even when God of Love is coming at us harder than they have to with a harmony, such as in “Green Eyes Black Night” and the epic “Fingers Crossed,” our singer sounds really relaxed and completely at ease with the pace of the music and the melodies he’s doing so much to shape without leaning on the bottom-end in the mix. Whether describing loss or longing, there’s some confidence in this man that doesn’t usually translate with the same hearty tone that it seems to in Do Your Worst, which is reason enough to give the complete tracklist a whirl.

To me, this LP feels like it was made for repeat listens. There are layers to the poetic dynamic in “Dallas Skyline” and “Wedding of the Century” that simply take more than a couple of sessions to really understand, and not only because of the way their verses unfold. I think you’ve got to let the music sink into your soul independently of the lyrics and then judge the content of what’s being sung to us from that place, which is essentially to say that understanding the independence of context in this record is to appreciate the character of the songs it contains.

I can’t speak for the longtime fans of God of Love, but I think this album was worth spending a little extra time to get perfectly right, and actually sounds a bit fuller than the act’s last record did. This is a realization of ideas rather than uncertain stabs at experimentalism, which isn’t to say that God of Love hasn’t known what they’re doing this whole time. Instead, they’ve found their groove and are using it to bring forth a substantially more stimulating listen than alternative fans are going to find when scanning the Billboard charts at the moment.

User Rating: Be the first one !
Share
Previous STATIC HEADZ
Next Reeya Banerjee “The Way Up” (LP)