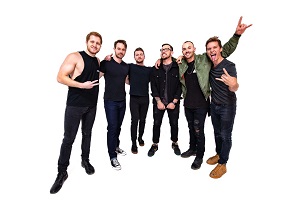 Hi Static Headz, thanks for chatting today! Let’s start off with your debut album “Static Headz,” tell us a little about this album.

We’ve been working on this album for a few years now, and we’ve hit several roadblocks along the way. It’s been quite the learning process, but we are very happy with how it turned out and it’s something we all are proud of. It’s got a lot of different influences and we tried to bring all of our collective ideas to the table and put them together in a way that hopefully keeps the listener wanting more. We like to think it’s a great variety of influences from all genres of metal and rock, mixed in with influences of hip-hop and electronic music. Everyone in the band grew up on different styles of music and we try to blend everything together and make it work. With our music, we try to keep it aggressive and interesting, but also melodic and memorable. With our lyrics, we definitely like to think we are very conscious writers with something to say that’s worth listening to. We talk about issues that people can relate to on a deeper level such as death, anxiety, and depression.

Kevin and Cody are the main songwriters. One of them will bring the basic structure of the song to the table, and then everyone else will throw their two cents in. Kevin’s writing style is pretty traditional in the sense of having a verse-chorus-verse-chorus-bridge-chorus. Cody’s writing style tends to have tempo and meter changes and more of a chaotic sense about it. The two balance each other out well. We almost always write the music first from start to finish and then put lyrics over top of it. The arrangements of our material got changed up in the studio though, for the better, with the help of our producer, Colt Capperrune, and Cody working on the record tirelessly and not settling for anything that was undesirable.

Was there a moment of clarity in your life when you realized you wanted to pursue music seriously?

All of us have always wanted to pursue music seriously as kids. Yes, we have other jobs to supplement income, but all of us absolutely love writing and playing music. Whenever we got our first mix back of our song ‘Fake Face’ we all were like, “Wow, we could actually do this as a career if we keep at this.”

Who inspired you in your music sound?

We have an endless list of influences ranging from different genres, but universally we are all influenced heavily by Linkin Park and Rage Against the Machine. Both of those are iconic and helped pave the way for the music we put out. Some other noteworthy influences are Bring Me The Horizon, August Burns Red, Issues, and Killswitch Engage.

What was the hardest part about making this album?

We had to switch studios and producers in the middle of the record, due to us and the first producer having a falling out. We had to start over from square one after having half the record done, and we were put out a lot of time and money. It was extremely frustrating. Then, in the middle of us putting the record together the next go around, the pandemic happened. It just seemed like we were never actually going to finish the record.

Has the pandemic changed your attitude on performing? Are you excited to do live performances eventually?

I wouldn’t say that our attitude on playing has changed at all, it’s still what we all live for. We are SO excited to start playing again and promote these songs in the live atmosphere.

Thanks for answering our questions today Static Headz! Where can we find your music online?

You can find us on any social media outlet and streaming platform as Static Headz, or at our website at www.staticheadz.com

User Rating: Be the first one !
Share
Previous Barry Muir “Weathered the Storm” (SINGLE)
Next God of Love “Do Your Worst” (LP)