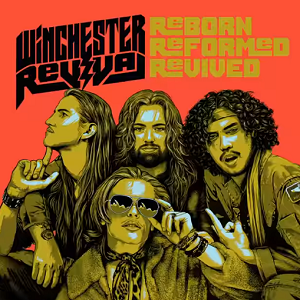 There are a lot of rock bands trying to get as spacey as the surreal pop movement has been getting on both sides of the dial in the past couple of years, but others like Winchester Revival have been more dedicated to getting straightforward and efficient with everything they produce. In the Australian juggernaut’s new single, “Reborn, Reformed, Revived,” Winchester Revival don’t even bother trying to experiment with the indulgence and theatrics that a lot of their closest rivals have been putting into just about anything that gets recorded inside of a studio, but instead get right down to business with a brutish groove and a loud riff that suffice for any amount of synthetics or aesthetical excess one might have included here.

This is a band that doesn’t have any time for following trends or even keeping up with what the Joneses are up to right now – they’re too busy telling the story of what rock is, was, and always shall be to bend to the will of a soon to be dated model, and that’s why this latest single bearing their moniker in the byline is such a hit with rockers like myself.

Adrenaline is more of an ingredient in this recipe than the main course itself, and although this Brisbane band doesn’t mind flexing a little when it benefits the narrative in this and other songs they’ve released, this isn’t about urgency per se. What’s important in this performance is the throbbing bassline and the way it’s framing the riffage, specifically as we get into the latter half of the track and the entirety of the arrangement feels rockier by contrast.

The drums are never crashing down on the lead vocal, or even the melodic instrumental componentry in “Reborn, Reformed, Revived,” but following the slick dispensing of lyrics at the helm of this master mix. The guitar parts are made to prowl rather than just straight-up running wild, and though it took a much more delicate touch to give this groove the kind of swing it’s got without eliminating the raw tension it produces around the corners in this single, it’s clear to me now that if anyone were capable of pulling off such a feat, it’s Winchester Revival.

I’ll be quite interested to see what this band’s live scheme looks and sounds like, but until I have the opportunity to find out for myself I think what they’ve recorded and released via “Reborn, Reformed, Revived” is definitely quite the teaser indeed. They don’t have a hard time raising the bar for both themselves and those who would seek to say they could somehow make a better, cleaner brand of rock n’ roll in 2021, and judging from the impressiveness of this performance in particular, I can understand why Winchester Revival has been scoring the major points with fans, critics, and rock observers the same that they have in the past year. 2022 is right around the corner, and for barely debuting less than two years ago, this group is doing pretty well at the moment.