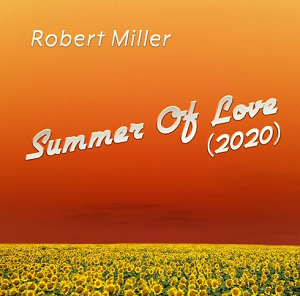 Led by the sizzle of an electric guitar and the confident swing of the drums in the background, Robert Miller doesn’t waste time with a big, cinematic intro to his debut solo record Summer of Love – he jumps right into the action with “Aches and Pains,” one of the album’s bluesier numbers, with an elegance that will become the standard in every song that follows. This opening cut isn’t quite the exotic fire-starter “The Night Was a Mystery” is, but they don’t make for strange neighbors in the tracklist here at all. In Summer of Love, nothing is off limits for Robert Miller, who despite giving me a lot of reason to love his work in Project Grand Slam manages to up the stakes even more with the release of his first solo LP.

At first glance, “Heaven” seems like a takeoff from R.E.M.’s “Perfect Circle,” with a slight punchiness added to the rhythm of the music of course, but as it unfolds, this song blossoms into one of the more moving pop ballads on the record. “You Can’t Tell the Truth” is more on the hot n’ heavy end than any of the other tracks sitting beside it in Summer of Love, but without its catapulting groove, I don’t know that the midsection of the album would be as epic and memorable as the first and concluding acts are. “Bip Bop” keeps the energy running on high, and while it’s an instrumental song, it doesn’t leave us feeling cheated out of substance – the polar opposite, in all honesty.

“Bourbon Street” is born out of the ashes of the beat in “Bip Bop,” and while it manipulates its melody into a swinging throwback to the midcentury jazz-rock of acts like Blood, Sweat and Tears, it isn’t nearly as loud or rambunctious as it comes slipping from Millers lips – and fingers – in real-time here. It isn’t until we get into the stagger of “Walking in the Corner” that the Robert Miller of Project Grand Slam fame starts to get funky on the basslines and rebellious with his attitude, but by now, he’s covered enough ground in the previous six tracks to comfortably segue into a realm that a lot of fans will do anything to hear him tap into.

Things slow down again for another blissfully melodic ballad in “Now and Always” before we get into the final curtain call for Summer of Love in the smashing duo of “New Life (Annie’s Song)” and “Another One Like You,” the two most fragile and exposed performances of Miller’s debut performance as a solo artist. In this pair of single-worthy songs, he hides behind no virtuosities and employs no grandiosity in his affectionate confessions – the rhythm, the harmonies, and his unfiltered poetry are out on the table for all of us to see, and it’s obvious beyond a doubt that he has been – and always will be – the most important player in most any group he contributes to. He made the right call with branching out at this moment, and I’d be surprised if any serious fans listen to Summer of Love and disagree with me.

Share
Previous WINCHESTER REVIVAL
Next “Forever On” by skinsNbones