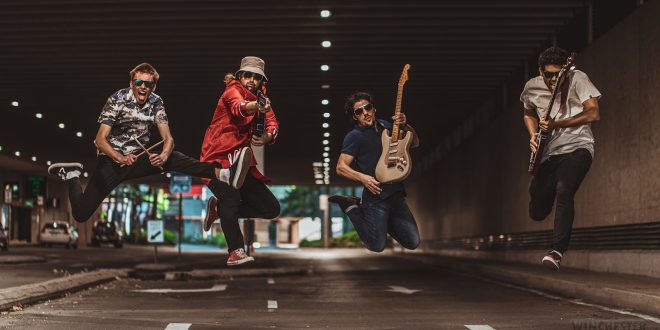 Winchester Revival’s music isn’t a style that you haven’t heard before but instead it’s a refreshing sound that hasn’t been heard for quite some time. I’d say we easily call into the classic & hard rock genre.

We want the younger generation to discover what true rock n roll is as the alt & punk rockers have taken over the scene a little bit. We believe we can bring classic rock back into fashion.

Our music is currently most popular in the USA, But our home town Brisbane has given great response to our latest single ‘Midnight Ride’ and in fact Brisbane is our most popular city in Australia right now. We have hit the scene performing shows in Brisbane city as well where we have had a fantastic response from everyone who has come along to watch us perform.

Since before we could read, all of us have been rocking out to our parents’ tunes. Nothing quite spoke to us as much as rock n roll. So growing up in the 21st century, we found that true rock ‘n’ roll (the lights, lifestyles, the rock concert experience) has faded. So once we formed a band in early 2020, it became our sole mission to bring that experience back to the world.

Wolfmother at the Triffid. They didn’t play to a stadium, but that was the best atmosphere, it had way more crowd interaction than any stadium could ever give. We love that interaction in our gigs, the feeling of connecting 110% with those who are listening.

Because you can listen to our music on a CD, but our live gigs will never be identical, and that’s the magic of a great concert.

Our latest single Midnight Ride hits all the sweet spots. The entire song feels like you’re strapped into a roaring muscle car punching 150 on the highway, taking you on a wild journey. All the parts in the band have their own interesting spots, but they blend and contrast in all the right ways. And it represents what we are as a band too; each of us coming from different places in rock, but at the same time, everyone bringing something fresh and interesting to the table. It feels the most ‘us’.

Funny you say that, we’ve only been around for this year! We used COVID-19 as a great tool for building the groundwork of the band, writing songs and rehearsing them to a perfection. So when all the restrictions lift, we can hit the ground running with a slight advantage over the other bands in the scene. With everyone having to stay inside, we recorded demos and even a single at home, and took our time polishing our tracks.

We’ve always wanted to rock the MCG with Angus Young of AC/DC. To show that rock hasn’t just died over the years, but it’s being avenged, almost revived (shameless self plug) in the eyes of the younger generation. And of course it’d be the ultimate honor to play with one of the greats.

We have two more singles coming out over the next two months, culminating our first EP at the end of the year. We’re aiming to play at some of Brisbane’s biggest venues to celebrate these releases, so stay tuned…