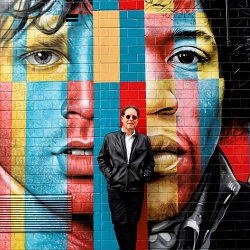 When the global pandemic derailed his band Project Grand Slam’s touring schedule for 2020, Robert Miller didn’t sleep in a lot and bemoan his fate. He did what any working artist does and that’s work. He turned his attention to writing new songs mined from the same personal vein as his earlier work though the year’s circumstances dictated he would approach committing them to posterity in much different fashion. Miller set up a home studio and recorded the new material with himself on vocals – a first in the bassist and bandleader’s career. “You Can’t Tell the Truth” is one of those songs and a single from Miller’s first solo release Summer of Love.

It is a track that takes an abbreviated and clipped look at modern American society and some of its key figures. Miller avoids coming off as some strident musical demagogue during the performance, something not all of his fellow songwriters and performers escape, and brings welcome personality to an otherwise harsh lyric. This is a song that pulls no punches and gets straight to the point.

This is reflected in its running time. At just over three minutes long, “You Can’t Tell the Truth” is ideal for airplay on a variety of platforms and will, eventually, make a lively concert track. It doesn’t make demands on the listener while still serving up an impressive musical presentation rather than empty vacuous pop. There are audible production effects throughout the track, but they never come across as ham-fisted and stagy.

Miller’s personality is, fortunately, never overstated. He keeps something of a smirking deadpan delivery going for much of the track though he toys with subtle vocal variations throughout the performance. He sounds, for someone not accustomed to this position, completely comfortable carrying the bulk of the track’s vocal demands. No one will mistake him with Pavarotti, but Miller is more than able to handle material such as this.

Miller and his musical partners are grounded in the present, without a doubt, but there’s no question they are throwbacks as well. We are lucky for it. We are lucky there are still musicians and songwriters among us who put the full breadth of themselves into their art so that we might better understand our own lives and hearts. So that we feel our passions and voices are heard and shared by others. “You Can’t Tell the Truth” does that. It is difficult to believe the remainder of Summer of Love will not follow suit.

We’ll hear from Project Grand Slam soon. You can’t keep a good band down. Let’s hope, however, that Robert Miller finds a space in time again to write another collection like this because it feels and sounds like new territory for him to explore. “You Can’t Tell the Truth” does, if nothing else, tell us the truth about where Robert Miller’s head and heart are at and we’re better off for it. Longtime fans of Project Grand Slam will be happy and newcomers to this artist are urged to hear this song today.