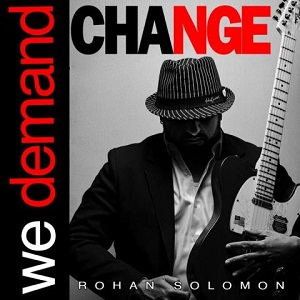 It’s said that the only constant in life is change. For Rohan Solomon, his patience is being tested. With his new single, “We Demand Change,” Rohan Solomon puts racism on blast, and does so with a combination of sorrow and zeal. “We Demand Change” is a song that is demanding in more ways than one. In the end, it’s a piece of music that will stay with you.

Rohan Solomon, is a native of India, who spent a portion of his career in NYC. Aside from being a Singer/Songwriter, he also works as a music teacher. As an audio engineer, he has worked with names such as Toni Braxton, John Legend, and my personal favorite, Immortal Technique. Therefore, you can conclude that Solomon has a firm grasp on creating quality records, coupled with a high creative IQ. On “We Demand Change,” we hear something highly original, with a potential for a bit of controversy.

Shots ring out, on the opening of “We Demand Change,” and they never fully subside. It’s one of those ideas, that works seamlessly, for the first few seconds, but begins to wear out its welcome. However, that is not to say that Solomon didn’t succeed in the desired effect. We want the shooting to stop, but it simply won’t. We then realize that Rohan Solomon has made a powerful statement, in the most unexpectedly trivial way.

The final mix on “We Demand Change,” deserves strong praise. There is a tremendous degree of clarity, and the song structure is of a rare sophistication. It’s part Folk, part World, part Contemporary, and part Pop. Solomon’s vocal work is sleek, clean, and slightly vulnerable. Often times, artists attempt to blend several different moods or genres, to less than satisfactory results. That is not the case with “We Demand Change.” Solomon is able to marry so many seemingly non compatible elements, to Great effect.

The song’s meaning is hidden in plain sight. Rohan essentially just reiterates his message throughout. It might be a slightly missed opportunity to have not done a deeper dive, from a lyrical standpoint. As a result, some might view this piece as virtue signaling. There is absolutely gorgeous music and amazing performances on “We Demand Change,” and waxing poetic would have certainly enhanced the experience. Having said that, the song still gets more right than it does wrong, and gives us a promising outlook for future releases from Solomon.

Rohan Solomon has a fine career ahead of and behind him. He’s that rare breed of songwriter, that can be artistically ambitious and commercially viable. His vocal work is strong, and he exudes an engaging and approachable personality. Rohan Solomon has truly achieved something special with “We Demand Change,” and you should go out of your way to seek it out. With so many shifting elements at work, change certainly seems to be inevitable. Let’s hope that the difference will tip the scales in favor of love and peace.

The music of Rohan Solomon has been heard all over the world in partnership with the radio plugging services offered by Musik and Film Radio Promotions Division.  Learn more https://musikandfilm.com