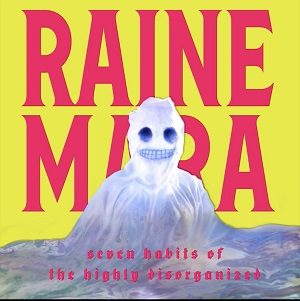 Raine Mara has fronted several bands in the Texas indie punk scene for almost twenty years and, when her last band MeanGirls broke up in 2019, Mara saw an opportunity to pursue long-deferred solo aspirations. She spent the bulk of the COVID-19 pandemic writing, producing, and performing her debut solo effort entitled 7 Habits of the Highly Disorganized. The nine track collection draws from several inspirations but Mara never relies on her punk chops alone while writing and performing these recordings. It is a personal document, without question, but its spirit reflects an aspect of the times in a way few other releases can or will. There’s no doubt it’s go-for-broke aesthetic will resonate with countless listeners who feel like they have nothing left to lose.

Many will experience the feeling they are hearing something unique and “hand-crafted” after the album’s brief opener “Forward”. Over a deceptively haphazard background with prominent freewheeling piano, Mara introduces the album in a manner akin to a book. Her spoken word performance never betrays emotion except for, perhaps, understated wry humor. Darkness is never far away as well. “Dusk” is near-uncategorizable. There is an intensely theatrical quality surrounding the album’s first “true” song and this spartan acoustic dirge has a woozy elegance recalling some musical outtake from a Fassbinder movie.

“Kidney Stones” is another woozy amble that, nonetheless, finds a groove early and rides it for the entirety of the track. It is highly stylized, without question, but its premeditated atonal qualities are oddly musical. Labeling songs such as this and its processor “punk” is an error; Mara exists in her own world pulling what she needs from a variety of styles. “Kudos to Chaos” is the album’s first outright rocker and illustrates how she balances the simplicity of her songwriting with a strong command of dynamics. There are a variety of textures, once again, keeping this interesting throughout.

She proves herself unafraid to revisit acoustic guitar with the song “Warbled”. There’s leering intensity emanating from her vocal and the disjointed multi-tracked vocals from earlier songs are present here as well. “Cheapskate” rides a wave of barely suppressed energy and crackles with the same no-frills lo-fi approach present throughout 7 Habits of the Highly Disorganized. The brisk pace matches the earlier “Kudos to Chaos” but has a cleaner overall sound. There isn’t a single track on this album you’d call filler; Raine Mara has marshaled a potent set for her first solo release.

No track on the album is more idiosyncratic than its finale. “Dolly Parton” sounds nothing like its namesake, it isn’t any surprising turn into straight Nashville, and moves along with a vocal mired in near murk. It sounds like a voice from deep within a void. Few albums in recent memory are as personal as Raine Mara’s first solo collection. 7 Habits of the Highly Disorganized operates under its own rules and speaks with a voice quite unlike any other in the popular music world today. If you love unique songwriting perspectives, this will linger in your memory.