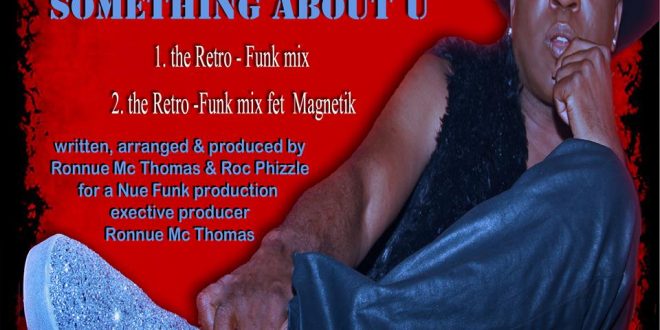 If you’ve been hanging around the Seattle music scene as of late or keeping tabs on its burgeoning underground R&B community, you’ve likely caught word of the rising star that is Ronnue, whose music combines elements of R&B, soul, funk and pop to bring an energy of the old guard into the new millennium free of the dead weight that once kept it relegated to the past. In his new single “Something About U (The Retro-Funk Mix),” the singer lays down the law with a versatile vocal that is equal parts 2019 soul serenade and vintage vinyl-clad funk at its stoniest and most carefree, but the gap that exists between the two has never seemed so small and crossable. Ronnue is the type of artist that doesn’t really care much for the branding that critics like myself are forced to assign new music with, and that is overwhelmingly evident in the way that he executes his unique songcraft. Not only does he try his best to separate his sound from anyone else’s, he has a poetic streak that makes his lyrics instantly recognizable, only lending further to his growing status as a local indie icon in the 206.

Stylistically, “Something About U” borrows from many influences that go outside of the typical constraints that surround funk. For one, there’s a decidedly hard-edged rock inspired mix to the vocals and the bass that I really wasn’t expecting out of this single, and it’s so physically threatening that its bodacious bassline takes on a life all its own.

As far as his amazing singing goes, there’s a suggested depth here that isn’t completely explored, but it’s sampled enough to give us an idea of what Ronnue can do when there’s nothing there to limit his creativity or hold back his powerful voice. I’ve got to make a point to see this guy live at some time or another; if even a little bit of this talent that he discharges so simply inside of the studio were to find its way onto a stage that he happens to be occupying, his underground status will quickly be revoked and compensated for with a major label deal that he’s unequivocally deserving of.

While the rich vocal harmonies might be what sells the complete package that is this pair of intriguing new R&B tracks, its Ronnue’s sleek lyricism that makes us want to hear even more from this talented young man, who packs quite a punch in a song that barely runs four minutes and twenty seconds long. What Ronnue does in this funky single isn’t just dig up the bones of a sound that once subjugated the airwaves some forty years ago in hopes of rekindling that same wealth and prosperity in today’s time. He effectively challenges the narrative of what R&B and urban pop are supposed to look and sound like in 2019, which if you ask me is one of the most progressive-minded moves that an artist could make at this juncture of the genre’s history. His story is starting to unfold, and the first chapter already has me convincingly addicted.

The music of Ronnue has been heard all over the world due to the radio plugging services offered by Musik Radio Promotions. Learn more – HTTPS://musikandfilm.com

User Rating: Be the first one !
Share
Previous Protovulcan takes on the raw abrasiveness of noise
Next Stephanie Rose’s single “Luxury,” a prime cut from her EP Sprout