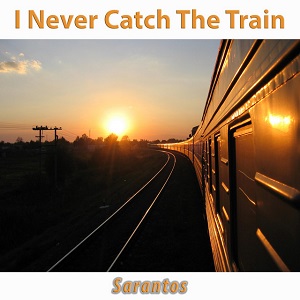 Some artists prefer a vague and understated persona. They strive for a mystique and an enigma that gives their music an added shroud of intrigue. This is not the case with Sarantos. Sarantos  doesn’t just show his cards, he tosses the entire deck on the table, with zero hesitation. Sarantos describes himself as a Singer/Songwriter, Multi-Instrumentalist, Author, Poet, and um, part time spy. He also claims to be a an alien from Mars. Sarantos newest single is titled “I Never Catch The Train,” and you could say it’s vintage Sarantos. At this point it’s hard to determine if Sarantos’ outside projects overshadow his music, itself.

At the very least, his music seems to merely be one aspect in an amalgam of media and artistic pursuits. As a result of his diversity, Sarantos comes across as a unique and in extreme impressions, difficult to interpret individual. Ironically, this actually does cast him in a somewhat mysterious shadow, in contrast to his natural transparency.

Sarantos is quite open about his views and political beliefs. Case in point, there is an adjacent poem attached to “I Never Catch The Train,” in which he declares his support for President Biden. Lyrically, Sarantos shows a social sensitivity and a poetic awareness that gives his music an added quality. Musically, he veers in between masterful and meandering. His vocals lack a bit of discipline, but he shows tremendous range at certain points.

Another Friday night/Tangled up with no help/Friends are around/But I’d rather be someplace else. Sarantos has seemingly created his own reality within the parameters of his literal one, or is at least actively striving to. Listening to his music is initially a vexing experience, but you cannot deny his rampant individuality. “I Never Catch The Train,” could be perceived by some as being a sort of anthem for introversion, or disenfranchisement. There is a lingering, but detectable sense of forced detachment, throughout the piece.

The track isn’t pristinely produced and/or mixed, but nor is it grossly underdeveloped. There are a few issues in the tracking, and Sarantos will want to consider this on future releases. Speaking from experience, having so many projects to juggle at one time, can result in not being able to hyper focus on any one of them, individually. Now, being so honed in can be counterproductive, but as with most things in life, finding temperance is key. Sarantos has many areas to pull inspiration from, and that equips him with an assortment of advantages.

Finding the right temperament will be essential for Sarantos. Floating between actuality and oblivion seems to be a part of his work, but sooner or later a confrontation will present itself. Sarantos is an interesting study in the way of how well adjusted millennials actually are, in an increasingly surreal society. His music reflects his mentality, and that mirror goes both ways. For now, Sarantos is running at a predetermined pace, in order to catch that train.