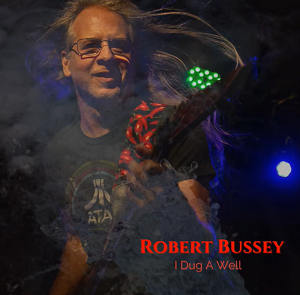 Say whatever you like about the state of mainstream rock n’ roll today; when a guitarist as talented as Robert Bussey grinds out a riff like the one we start his new record I Dug a Well off with, chills are essentially guaranteed. The hard-riding “The Drill Bit” kicks off I Dug a Well with a violent rock groove that slowly but surely transforms into something rather ominous and entirely metallic by the time we get about two minutes into the song, but as we’ll soon find, the music only gets heavier from here. “Breaking New Ground” bursts alive with a colorful, alternative rock swell that follows the chaos of “The Drill Bit” brilliantly, and while the thrashing of “Banging Into Bedrock” will incite more bedlam, there’s scarcely a moment in which Bussey doesn’t sound like a true rockstar.

“Lost River Underground” dives into metal balladry and refuses every temptation to give us a predictable climax. It’s structurally conflicted from the start and cosmetically frustrating in that the music never reaches that special fever pitch the beat alludes to from the jump; this, however, only makes the tension greater as we slip into the beautiful glisten of “The Alluvial Aquifer,” the true opus of I Dug a Well. Bussey has such a cinematic way to his songwriting, and in this progression of mid-tracklist songs, we start to get a grasp of how complicated and talented a frontman we’re dealing with here. There’s no overstating his presence, nor is there any debating who the constant focus of attention is.

“Changing the Channel” allows for the flood of distortion to carry forth from “The Alluvial Aquifer” and evolve into something beyond virtuosic in shape and size. “The Artesian Well” seems a little conservative by comparison to the two songs preceding it, but it doesn’t lack the emotional tone of any track on the record. Jeff Beck’s “The Pump” sounds particularly sexy with Bussey straddling its familiar rhythm all too closely for us to resist the urge to swing along to his riffing, and while it’s a cover song, it doesn’t feel recycled at all – actually, it’s one of the most inspired performances on the album.

I Dug a Well wraps up with a pair of tracks collectively making a tour de force as powerful as anything we hear early on in the record, but personally, I found the latter to be the more cathartically appealing after several repeat listens. “Come to the Water Table” and “Hope Springs Eternal” are majestically epic and perhaps the only two songs on I Dug a Well that feel like they’re too big for the studio they were recorded in, but through the lens of Bussey’s experimental aesthetics, I don’t believe he could have ended the album with a better coupling than this. Robert Bussey delivers what just might be the most evocative instrumental guitar piece to drop from an indie source this year here, and despite a lackluster output from major-label rockers in 2021, this gives me a lot of hope for what the genre can still produce in the future.