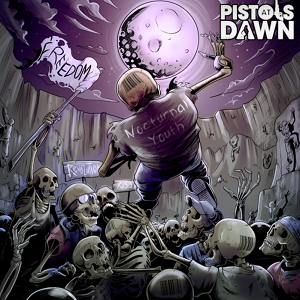 If you look at the commercial angle rock n’ roll is being framed from most frequently in 2021, you might get the impression there isn’t much to be excited about in the genre anymore – but the truth is that nothing could be further from the truth. Acts like Pistols at Dawn are out to save the old fashioned aesthetics of true rock from becoming all but a chapter in the history books in their new EP Nocturnal Youth, and while it borrows a lot of its style from the past, its players sound more interested in the future than anything else.

The volatility of the guitar parts in “Crown,” the record’s lead single, actually adds more positivity to the track than it does structural negativity, and although I can see where some critics might look at the general mixing here as being cluttered, I think it was important to make these songs insular as to emphasize the brawn of the music. There’s no gristle in this tracklist – it’s all meat, and best of all you don’t need to have a premium sound system to enjoy the quality of the material as it’s presented from song to song.

Pistols at Dawn utilize discordance in numerous spots here surprisingly well, but chief among the examples that immediately come to my mind can be found in the opener “Voices” and “Gone Black.” These two tracks are immortalized by their noisy basslines, but they aren’t defined by anything other than the exchange between riff and rhythmic singer, creating a sense of simplicity where things might have gotten a little sticky for the listener. You can’t accuse this group of unoriginality, and they make that a theme of their work in pretty much every composition they’ve produced in their discography since originally hitting the scene.

If “Now Is the Time” were to be played live and before a decent-sized crowd of people, I would think its percussion might be a lot louder than it comes out in this version of the song, but this doesn’t take anything away from the collective kick the track has at the right volume. The lyrics could have been integrated into the throttling grooves a little better than they were, but for a band still finding their voice for a mainstream market, I wasn’t expecting much more than this at all.

Unpredictable times have befallen the music industry once more, but I don’t think that Pistols at Dawn need to be too worried about their future considering how well-organized they sound in every song on Nocturnal Youth. They’ve got a hard-driving affection for the heavier side of rock n’ roll music many critics have just as soon stopped covering entirely, mostly because of how few acts have been playing it with any real passion. Nocturnal Youth is structured atop that passion, and though I was not a fan of Pistols at Dawn before listening to their new record, I would call myself one now that I know precisely what they have to offer.