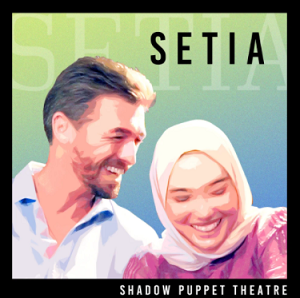 No matter the language you speak, the poetic value of the new single “SETIA” by Shadow Puppet Theatre is indisputable from most every angle – and the manner of its delivery is the biggest reason why. “SETIA” sees Shadow Puppet Theatre touching on the concept of less is more without breaking away from the moderate grooves and lush tonal presence that has made their other releases so captivating thus far. Starting with bilingual lyricism, we’re slowly but surely brought into a melting pot of artistic wit not commonly found in the mainstream pop scene these days, and it doesn’t take long for anyone within earshot to get into the essence of the aesthetic.

Visually, the music video for “SETIA” is reflective of the modesty behind the songwriting technique used by the band, but it doesn’t shortchange us on any of the alluring elements one would expect out of a contemporary pop release, either. It’s difficult to balance the indie aspect of an act’s sound with the pleasant components of a familiar pop model, but Shadow Puppet Theatre make it look and sound remarkably easy in this performance – to such a degree that I can imagine it ruffling the feathers of their competition.

The bottom-end in this track is really supple and surreal in the grander scheme of things, but the rhythm of the percussion is nonetheless a focal point of our attention as we get into the climax later on in the song. There’s little worse in this genre than a lousy groove backing up a sexy harmony like that which we find in “SETIA,” but luckily for us Shadow Puppet Theatre are more than aware of this fact. I get a meticulous vibe from their work, and critically speaking that’s definitely something they should be proud of (especially next to their rivals).

This arrangement of the instruments tells me that the band could get really wild with “SETIA” in a live show were they so inclined to add a little bit of electricity to the fold. In either case, the composition itself would likely retain the same emotional soul – with the crushing poeticisms of our singer, there aren’t many sonic contortions I can imagine a single like this one incapable of twisting into. That’s pure versatility on the part of the songwriters right there, and no critic is going to disagree with me on that.

There are plenty of impeccable alternative acts you can get into in 2021, but Shadow Puppet Theatre are far and away one that I’m really happy to have found out about this January. “SETIA” blows down the modern barriers with experimental conveyances that wind up sounding as familiar as a Beatles ballad by the end of the track, and while I don’t think it’s going to be the lone hit this group turns in before the year has come to a conclusion, it’s currently one of the best entries in their discography (and a mighty fine way of coming to understand their artistic goals).