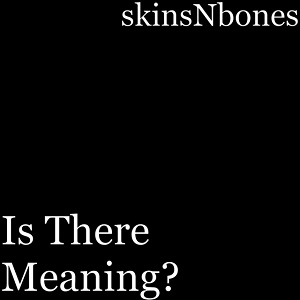 skinsNbones “Is There Meaning” (SINGLE)

When you get the ball rolling as hard as skinsNbones does in their new single “Is There Meaning,” it’s a decent likelihood you play alternative rock the right way. The frills, the fluff, the flat out fatty tones that we used to get away with some ten years ago have no place in the genre now; instead, the tightness and efficiency of first-gen punk rock are here to stay, and this band has no problem living up to that standard. “Is There Meaning” plays and sounds like something out of the late ‘70s/early ‘80s rock n’ roll handbook in the sense that it’s comprised of as little as possible, and yet packing so much intensity it could put the competition out of business.

This chorus is arguably too heavy on the beat to sound light and poppy to audiences, but its structure is absolutely something ripped from the classic American songbook. Again, efficiency is the name of the game in “Is There Meaning,” and I don’t think that skinsNbones would have been able to make this song happen without rejecting the conventionality of indulgence so common among their peers. The guitar parts get a little excessive towards the climax of the song, but all in all the instrumental framing is almost as straightforward and unremarkable as the lyrics and vocal delivery are, which is far more a compliment than anything else. This band makes recording look like a real passion project instead of something all of the well-to-do are engaging with these days.

Production quality can’t save a bad song from itself, but it can certainly bolster the details of a good one in the best-case scenario, and the latter is true of “Is There Meaning.” Though polished like a pop single, this is a song that doesn’t have the natural shine a lot of mainstream content does, thus making its dirtier elements some of the well-spotlighted of any in this mix. There’s no denying that skinsNbones take every step of the recording process seriously, and if they didn’t, they wouldn’t have put the work into this single that they did, especially given the way the market has been treating most of the puritan rock music to have emerged from the underground in recent times.

You don’t have to be a rocker to appreciate “Is There Meaning” and the heavy musicality it’s offering anyone who gives it a spin this spring, but those of us who have been listening to punk and alternative music for ages can enjoy a real gem in this single for sure. skinsNbones are playing a style that has literally become the epitome of its title once more, and while indie rock is never going to fade from public interest completely, this is a band definitely living on the outside of the mainstream bubble and killing it every step of the way. Rock needs this fringe element to stay dangerous, and without the likes of skinsNbones keeping the torch lit, I can’t say the future of this genre would look as bright as it does right now.

The music of skinsNbones has been heard all over the world in partnership with the radio plugging services offered by Musik and Film Radio Promotions Division.  Learn more https://musikandfilm.com