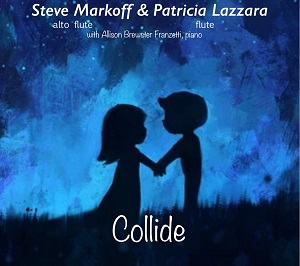 The dynamic Steve Markoff and Patricia Lazzara are collaborating again. This time, the two flutists are covering the Howie Day pop track “Collide”. Capturing the romanticism, the starry-night imagery, the instrumental track is a dazzling display of sonic beauty. Featuring the wonderful piano performance of Grammy nominated Allison Brewster Franzetti, “Collide” transcends. Lost into the wispy and whimsical arrangement, the flowering sounds are a perfect tribute to the pop classic.

The selection starts out with piano. I waited patiently for the flute to enter and it was seamless. Both instruments create a drama that I feel not only matches Day’s original tones, but perhaps even elevates the expression. As a listener, I became light, calm. I was drawn to the melodies. The flutes dance with each other. I felt a real intimacy between the instrumentation.

As the song continues, my mind grew fonder for this rendition. It’s an interesting choice, for one thing. For another thing, the tempo and the emotion the instrumental provides seemingly matches the original version. I was a fan of Day’s song before, but now I’m certainly a fan of both versions. I love that the song “Collide” gets a second lap, another shot. I’m so appreciative of the instrumental version because it also allowed me to create a unique story in my own mind. I didn’t feel encumbered by lyrics. I was loose and free. You can still find a way to feel a connection to Day’s original words, but in a new, unique way. Unexpected and absolutely riveting, the instrumental “Collide” is breathtaking. What better way to relax, reflect and re-envision a particular hope or a cherished memory. Drawing inspiration from Markoff, Lazzara and Franzetti is a walk in the park.

“Collide” is a triumph. It champions love and simplifies the complexities of emotions we endure in relationships. This version, to me, encapsulates those highs and lows. When the flutes come together it isn’t a collision, but rather a braiding of two distinct emotions. This particular track communicates to the audience that two people can indeed fall and get back up. You need one another. And the other person needs you. The piano compliments the flute, more so in a way than I think a voice could. You might feel the same.

New Jersey’s Markoff performs the alto flute. Additionally, he’s versed in various styles like Celtic and baroque. Lazzara, who is also from New Jersey and performs flute, is a three-time winner of the Artists International Competition and has performed on such esteemed stages as Carnegie Hall and the Kennedy Center. The two met when Lazzara taught Markoff music lessons. Franzetti, based in New York City, is a two-time Latin Grammy nominee (2014, 2018) for Best Classical Album and is a 2008 Grammy nominee for Best Instrumental Soloist Without Orchestra. She is married to Argentinian composer and arranger Carlos Franzetti. He’s a multiple Latin Grammy nominee and won for 2001’s Tango Fatal. He also composed the music for the film The Mambo Kings (1992).

The music of Steve Markoff & Patricia Lazzara has been heard all over the world in partnership with the radio plugging services offered by Musik and Film Radio Promotions Division.  Learn more https://musikandfilm.com