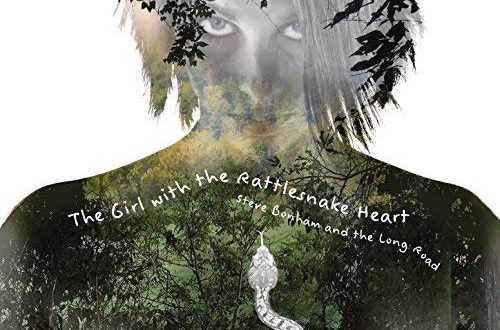 With a bluesy twang, “The Girl With the Rattlesnake Heart” slithers into existence, supply appointed with a folkie vibrato but teeming with rock n’ roll grit just beneath the surface. The latest single from Steve Bonham and the Long Road isn’t your typical pop fodder – in fact, quite the contrary. Here Bonham and company utilize a newly cultivated irony in their lyrics that transform the epitaphic into the effervescent and are bonded with a stylish discord that is one part blues/rock and another part ambient folk. The layers of stately melody are penetrated by a grinding tempo that crushes anything that gets in its path, but listeners shouldn’t be daunted – “The Girl With the Rattlesnake Heart” is anything but inaccessible.

Bonham croons with a sincerity in his voice that is refreshing and warm amidst the chaos of the music, which in its own right is magnetizing and mammoth in tone. The verses themselves are swaggering and a little hostile, but when sung by Bonham they take on a somewhat endearing quality. This song reminds me a bit of Billy Bragg minus the political narratives; the words are fearless and efficient, but they’re leading the music instead of following a beat. The mix on the percussion drags a chain through the middle of the chorus’ harmony, which contributes a raucous texture to the track and keeps it feeling authentic and unvarnished by commercial entities. Part of the reason why I like this song so much is because it isn’t afraid to break off of the beaten path and explore the depth of its parameters – which to be frank isn’t something I hear in a lot of Steve Bonham and the Long Road’s peers.

The blues elements in this song reach their fever pitch in the chorus. Bonham’s howling vocal is as harsh as the beat of the track, and it fits in exquisitely beside the melody and steadies the intensity of the drums. There’s no question that Steve Bonham deserves his due credit as a vocalist just as much as he does a lyricist; his songs are indeed a cinematic treat for anyone who understands the complexities of music theory, but there’s just as much to be said about his singing, which is as indebted to the southern drawl of American blues singers as it is the articulate prose of British singer/songwriters.

An airy, light mix accentuates the bolder tones to be found in “The Girl With the Rattlesnake Heart,” which without such filtration would have been a much heavier affair. There’s a weightiness to the strings that is instantly recognizable in the intro and becomes even more prevalent after the first chorus, but it never gets out of control or sonically intrusive. We actually get the best of both worlds in this track – the band isn’t sacrificing any tone, but the mix is filtering out the unnecessary fat. Steve Bonham and the Long Road have conjured up quite an inventive single here, and though it’s much more intricately constructed than anything else you’re likely to come in contact with this fall, it’s easily one of the most original and addictive folk songs I’ve heard in some time.

Steve Bonham’s music has been heard all over the world due to the promotional services offered by Dannie Cortese Entertainment & Publicity. Learn more here – http://www.daniecorteseent.com/

User Rating: Be the first one !
Share
Previous Xuan is Having Some Fun
Next Rebecca Blasband’s new album is “Here”