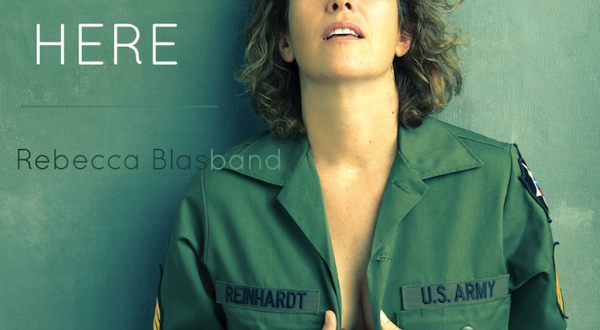 The piano balladry of “Love Is,” the first track in Rebecca Blasband’s all new album Here, delicately drifts through the atmosphere of an airy production as it were as light as a feather. Blasband’s voice is the heaviest component of the entire song, and it actually weighs down the effervescent grooves and keeps them from blowing away with the wind. The tone ebbs and flows before breaking away and allowing us to proceed into “Fool’s Heaven,” a pointed, rebelliously freewheeling folk song that dabbles in sounds usually found south of the border. The lyrics cascade into the blistering bassline and meld to make a forceful sway that is irresistible to anyone with a taste for soulful, exotic beats. The title track presses its way through the mix with an ethereal, jazz-inspired tempo that modulates under the direction of Blasband’s swaggering yet moody verses, but there’s never any doubt in Here as to who the star of the show is, and that shouldn’t suggest that these songs are selfishly stylized around their lead singer alone.

Blasband actually steps back a little in “Walking on Water” and lets the harmonics in the band lead the way. She duels with a mischievous guitar part in “Who the Hell is Peter Brown?,” but it’s the listeners who actually come out the victors. A bright pop melody shoves around a somewhat boisterous beat in “Those Happy Days,” but Blasband really turns up the aggression in “Ghost Song,” an acoustic romper that is built around her stellar, spoken word bark. “Way of the World” returns us to a more comforting trajectory, but it’s nevertheless rife with a somber overtone that is hard to ignore once the percussion spreads out and the bass takes charge. It’s like pleasure mixed with pain, or love blended with hate; this duality in her style of attack is so unique and captivating that it’s hard to focus on anything else when it’s highlighted as vividly as it is in the middle portion of this record. Blasband is a heck of a vocalist, but she is even better at creating a mood with her prose, which reminds me a lot of the beat generation minus the drug-induced diatribes.

“Gotta Work It Out” throws a colorful smoke in our face and evaporates under the pressure of a thick guitar riff that injects a dash of thunder into Here’s smorgasbord of harmonies. Blasband throttles us with her fragile words in this song, but they don’t crumble beneath all of the tenacity. “Target” flirts with that sliver of jazz we heard earlier on in “Fool’s Heaven,” but avoids the temptation to go off the rails altogether and instead offers up a healthy slab of consistent rhythm. “Long Distance Love Affair” delivers the knockout punch for Here in the form of a countrified ballad that haunts us long after its dark melodies fade into the ethers from which they arose. Rebecca Blasband has a name that has come to carry a sterling reputation with its utterance in the two decades that have passed since releasing her debut RAPT, and in this latest effort she proves that her aesthetic has only gotten more fascinating and alluring with age. Here may well be her swansong, and it’s a worthy acquisition for those of us who live for sultry harmonies free of commercial fat and filler.