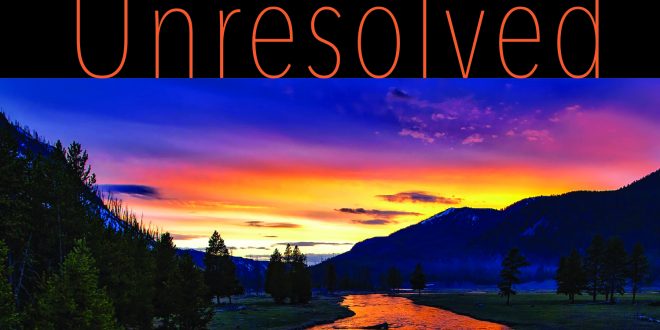 Stephen Winston’s Unresolved features nine songs that, unfortunately for Winston, required a great deal of personal trial to produce. The story behind Unresolved is well worth looking into if you love the album as much as I do, but the songs are what we are here for. The fifth album from this singer/songwriter and musician opens with the track “Sun on the Boats” and the restrained elegance of his musical arrangement will surely capture your attention. He doesn’t have a note perfect voice, thankfully, but even a single verse of this song amply proves he possesses the phrasing acumen to make these fine lyrics mean even more. The use of strings in the song, contrasting with the piano accompanying Winston’s voice every step of the way, is one of the dominant features of Unresolved, though not present in every song.

“Maidens” uses a full band arrangement, complete with drummer, unlike the first song, but much of its opening half is cut from a light Americana mold. Near the song’s conclusion, however, Winston mixes in some stinging electric guitar work. It has the same melodic focus you hear throughout Unresolved while still leaving its mark on the song. It brings “Maidens” to close on a surprisingly fiery note for me. “Unresolved”, the album’s title tune, has a stronger vocal presence with backing vocals and multi-tracks at play and it’s a natural fit for the song’s strings. It’s Winston’s most emotional vocal yet on the album and his voice reaches its highest points of pure drama during the song’s refrain.

“Rainbow County” shows Winston turning his hand to traditional Americana with a strong country music twist and he has a great voice for it. The gentle urgency of this song, never rushing itself or listeners along yet inexorably moving towards a clear conclusion, may escape some listeners’ notice, but I think it’s one of Unresolved’s sleeper gems. If he set out to create a showstopper for the album, the most likely candidate is “Maybe It’s for James” as this is an intensely cinematic number both lyrically and musically. Winston never contents himself with maintaining a predictable approach in this song and it takes some turns, particularly in regard to the strings running throughout the tune, that make the listening experience all the richer.

“Remember: is another song equally affecting both musically and lyrically. The lyric is a tightly constructed marvel lacking a single needless word while the arrangement maintains a perfect balance throughout and neatly dovetails into the words and Winston’s vocal work. The album closer “The Last Night” has many fine attributes, but its two most important elements are the violin and Winston’s voice. In a very different way than we heard with “Maybe It’s For James”, Winston pulls out all the emotional stops here and ranges from sounding ravaged to assertive and certain. The violin playing is, essentially, his singing partner for the song’s duration and responds magnificently to the vocal. I cannot imagine a finer way to end this release. We need more albums like Unresolved in these perilous times to help remind us of our shared humanity.

User Rating: Be the first one !
Share
Previous Rebecca Blasband’s new album is “Here”
Next Madelyn Victoria’s new single “Right Here With You”