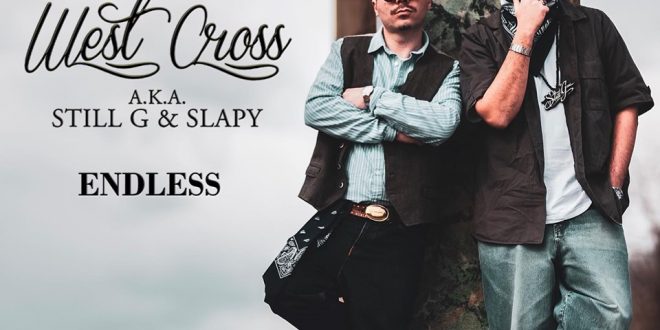 Still G & Slapy’s “Endless,” which recently scaled the Euro Indie Music Chart to the #10 slot whilst receiving airplay on hundreds of stations in over five dozen countries around the world, opens with a menacing synthesized salvo that will grow stronger with every verse that the Italian lyrical wizards discharge in this intrepid collaborative single. The rhythm kicks into gear with the first appearance of a confident drumbeat, but without the melodic crooning of our two sonic Sherpas, we could easily get lost in the rocky but hypnotic harmonies that meet us at the start of the song. “Endless” is a club jam with the heart of a hip-hop ballad, but no matter what critics and fans call it this summer, it’s a smoldering hit single for certain.

Instrumentally speaking, this song has a lot more in common with the experimental hip-hop of the American West Coast scene than it does anything in Europe at the moment. The synths are grand and full of physicality, but the master mix never allows for their potency to bleed into the vocal track and obscure our appreciation of the lyrical center in “Endless.” The words slip from Still G’s lips so smoothly in the refrain, and when he clears out for Slapy’s epic chorus hook, the bassline fills in the void that his vocal leaves behind. These guys sound like they’ve been playing together for decades, but they’re in fact at the start of what could inarguably become something fabled if they keep their noses to the grindstone.

The music video for “Endless” has a cerebral feel to it, with the visuals expressing just as much emotion as any of the actual lyrics are, and though it features Hollywood-quality camerawork, it doesn’t rely on the same tired thematic elements that most rap videos – especially in the underground – tend to. Still G & Slapy didn’t come to be represented by heavyweights like THOMAS Music & Art’s Genialsong Group by blending into the crowded talent pool of their hometown scene, and from what I gather in both the single and the video that was made to help promote it, they don’t seem like an act on the verge of selling out their artistic ethos in the name of making a quick buck. To put it simply, it’s more than obvious to me that Still G & Slapy are in this for the long haul.

“Endless” is an affectionate and brooding rap single that doesn’t placate us with a lot of watered-down stereotypes, campy subject matter or bombastic sonic frills. This song has soul, takes inspiration from the crossover R&B of the late 2000’s, and looks forward into the future of hip-hop with a brave face that American and European rappers alike could stand to learn a lot from. Still G & Slapy are making music that wasn’t designed for one select group of hip-hop fans alone, and while they’ve still got room for growth and aesthetical expansion as a unit, they’re submitting a real summer treasure in this sophisticated new track.

The music of STILL G & SLAPY has been heard all over the world due to the radio plugging services offered by Musik and Film Records. Learn more – https://musikandfilm.com