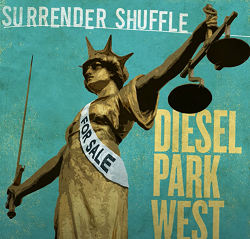 On the back of a searing guitar melody, we quickly find ourselves in the center of a flashfire pop groove shortly after pressing the play button on the new single “Surrender Shuffle” from British pop-rockers Diesel Park West, out everywhere quality indie music is sold and streamed this September 30th. Featuring an insular harmony and a beat that doesn’t give up for anything, “Surrender Shuffle” is very much on par with what devoted DPW followers would come to expect in any of their work, but I will say listeners shouldn’t anticipate hearing a carbon copy of the band’s previous recordings in this latest release at all. They’ve come a long way since first getting together decades ago, and in their most recent work, it’s immediately obvious how in love they remain with the music to this day.

There’s a lot of tension on the backend of this track, but it slowly comes undone as we press forward through the song through the quiet poking of the percussion and the bassline. We start off with “Surrender Shuffle” feeling remarkably pressurized, as though the bottom-end tones here are going to overwhelm the front of the mix – the vocals, the guitar parts, etc. – long before the band gets to the halfway mark, but without making much of a fuss, the bass understatedly begins to ease into the groove set forth by the drums. Before we know it, the musicians in the studio are melting into each other’s play, allowing for textures to attach adhesively and become as unbreakable as the synchronicity of the hook.

As far as production quality is concerned, “Surrender Shuffle” is another top notch studio cut from Diesel Park West that doesn’t sound oversaturated with predictable plasticity otherwise common in the world of mainstream pop-rock (and particularly within the context of music debuting in 2020). There’s a little more varnish on the vocal harmonies than we probably needed, but all things considered, there’s enough of a compositional balance and an aesthetical equilibrium to the very construction of the main melody to counteract any cosmetic shortcomings here – let alone something so relatively minute. In the grander scheme of things, the main point to walk away with when listening to this single is noting the muscularity of a music born of simplicity and essentially barebones songwriting wit – the latter of which has become scarce on the FM dial in recent years.

“Surrender Shuffle” crosses the finish line much as it commences in a haze of guitar-driven warmth, and at a little over three minutes in total length, it’s a single that can be played through a couple of times unashamedly. Catharsis is the name of the game for Diesel Park West in their latest release, and while theirs is hardly the only intriguing and evocative pop song to come out of the British indie circuit in 2020, it’s definitely one of my personal favorites this September. DPW might not have anything left to prove, but they’re playing like their careers depend on it in this exceptional addition to an already unforgettable discography.