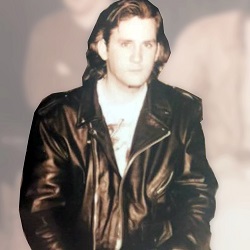 Mike DeFoy has two new singles out called “Glass Houses” and “Poison Kiss”. Known as the ‘Creator of Chicago’s Sky Pilot Rock and Roll Band”, DeFoy’s new rock tracks contain robust rock guitar riffs and a whole of lot of swagger and personality. Melodic rock fans will adore both of these easy-to-escape-in songs. DeFoy’s rapport with the listener is instant – he has a bit of grit in his voice that is masked by excellent guitar playing a-la Eddie Van Halen himself.

One of the things that catches your ear first in DeFoy’s “Glass Houses” is the fullness of the music. It’s tight with a freeing drum arrangement and a guitar that is throwing shapes. He’s a natural frontman, with the pipes landing somewhere in between John Parr (“St. Elmo’s Fire (Man In Motion)” and Stan Bush (“The Touch”). If you’re seeking some 80s melodic rock meshed with a fresh 2020 offering, then “Glass Houses” is your jam. He’s really in the zone with the crushing sound. The guitar bursts out shards of sun rays. We can find a way to bring the walls of their glasses houses down, down, down, down, DeFoy sings. His intricate guitar bridge is just as bright and just as sweltering and the constant percussion push. The final moments of the song, the drum kits picks up steam before a grand finish. Altogether it’s the perfect blend of a solid rhythm section and a captivating guitar arrangement. Oh, not to mention, a killer vocalist. What I gleaned from the song is that he’s not going to let any low intensity moments slip through the musical cracks.

In “Poison Kiss” another interesting music bed cranks from DeFoy’s guitar. The rhythm section has a bit more soul, a bit more funk compared to “Glass Houses.” It’s a slight semblance of the Van Halen track “Finish What You Started”. There’s a swampy tone, a darker mood. Tonight I miss your poison kiss, what am I, what am I gonna do, DeFoy sings, before changing his mind in the next line with you’re mine, you’re mine, now I don’t even want you. The groove is subdued, but the fiery fem fatale’s footprints leave their mark.

This woman he sings of, by golly, she sounds like she’s betrayed him numerous times, and he can’t get enough. He just keeps going back to the well. I gotta say this is a relatable character – I think many people can count on one hand (or two) the amount of times they have been cheated on or perfectly aware of being in a toxic relationship and they can’t help themselves. I think DeFoy’s confidence rock and demeanor give him a trustworthy impression – as a listener I wanted to hear more how the song played out. He comes across as a regular guy, and an extraordinary story teller. It’s a clever song with a universal theme.

The music of Mike DeFoy has been heard all over the world in partnership with the radio plugging services offered by Musik and Film Radio Promotions Division.  Learn more https://musikandfilm.com