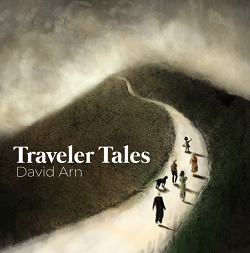 “Love is Free: The Writer’s Tale” by David Arn

“Love is Free: The Writer’s Tale” by Virginia-based, David Arn, from the album Traveler Tales, is but one of many accessible tracks on the album and well-chosen for one of its single, for which there is also a promo video. The title itself hangs in the balance with the album title and concept, so there is more to it than meets the eye, as it is part of longer story and so is Arn himself. The players on the album are all top- notch experienced veterans at which Arn spares no expense to bring quality musicianship to his world class songwriting.

Before completely digging into “Love Is Free: The Writer’s Tale,” it helped to hear the rest of this album to know where it fits in and help grasp where Arn is coming from. And having not been familiar with his previous two albums, it brought me up to speed on this terrific song that fits right into the rest on the album mastered by Alex Wharton at Abbey Road in London. One of the best things about this song is the lyrics of Arn, which he is well known for being good at, and it gets better with each listen.

This single comes from an album where every track might as well be a single because each one is a tale of the traveler, so they are all featured tracks and each one as good as the last. “Love Is Free: The Writer’s Tale” is the fifth track so far with a video to promote it, as they keep getting released at a rapid pace. And if that is not interesting enough, it is recommended to see for yourself and get into each track as they go, which is also the easiest way to get into Arn’s amazing lyrical style and laid-back vocals.

It doesn’t really matter where the song fits into the Traveler Tales, as each song stands up on its own and “Love Is Free: The Writer’s Tale” bubbles along nicely, just like a writer’s pen or an artists’ brush flows. But to speak for one is not to speak for all, it is about this song and what it resonates with, and to me that is clearly Arn’s influences. I just can’t tell exactly from where he draws, other than the obvious Dylan’s of the world but at the same time he sounds like no other.

To get the best feel in order to properly assess “Love Is Free: The Writer’s Tale” it is recommended to look at the video and see how the free spirit of Russian dancer, Nastya Memphis sheds the light on how simple and easy it is. The music and words of tend to speak volumes on their own without even describing the content, and that simplicity if the mark of greatness. The less is more effect is achieved by the bucketload, and that is only one discovery to be made if you have not heard David Arn’s outstanding work yet.

The music of David Arn has been heard all over the world in partnership with the radio plugging services offered by Musik and Film Radio Promotions Division.  Learn more https://musikandfilm.com