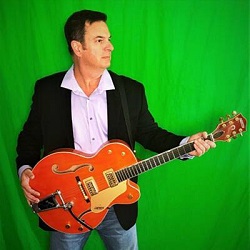 The former front man and songwriter for The Skeptics, Tom Mullen has over 30 yeas of making music under his belt. You might say he has a unique view of politicians and government – his new solo track “Invisible Hand”  triggers what some might call a protest song, and what other listeners might refer to as poetic truth. Fleshed out amongst a rockabilly-like guitar bed and a tight percussion, “Invisible Hand” is a top-notch rock tune with a positive message.

We help each other, when we don’t mean to…follow the golden rule, Mullen sings. The Buffalo, New York native sounds like a cross between Stephen Stills and Mike Mills (R.E.M.). His voice is sincere, and he never appears to be pressing a firm stance on his listener. His voice could give a few more ranges, but I like the scope he covers. I think he plays it a bit conservative with his voice (the song does call for it, though). Nor does he sound like he’s preaching or patronizing. He’s just slaying his truth. The invisible hand, he sings, is people helping people and not the government. Don’t believe there ain’t nothing free, he sings. His guitar bleeds like a James Burton-esque arrangement, with a honey-dipped melodic tone. The song really sounds polished, but that’s not to say he loses his rock street cred.

What I really enjoyed about “Invisible Hand” is the song’s honesty. Mullen has integrity in his voice and the music foundation is pure rock and roll. He throws out a few politically charged lines, but overall, this isn’t one of those songs that will alienate listeners. He’s calm, but there is a glimmer of spunk in his voice. I don’t think he’s coming from a disillusioned viewpoint. I think he’s from a mature standpoint. His idea of social justice warrior is to be behind a microphone, armed with a guitar. I think, like the great poets of the 60s (Joan Baez, Buffalo Springfield and more) his heart is true. Dabbed with the tempo of an Elvis Costello track, “Invisible Hand” transforms the listener across several musical eras. It has that pull that takes you more into the nostalgic guitar worlds, but Mullen’s voice and overall vibe sounds perfectly modern.

“Invisible Hand” is part of Mullen’s anticipated sophomore solo album. He expects the collection to be out in early 2021. His last outing was 2018’s Unfamiliar Ground. What I’ve learned as new listener to Mullen is that his approach to music is unencumbered by any rhetoric or extra bells and whistles to his music. It’s raw, it’s genuine. “Invisible Hand” has a most subtle way of gripping the listener. It’s one of those slow burner songs that lingers for hours, and leaves a strong impression. I would highly recommend this song to the fans of the aforementioned groups (R.E.M., Elvis Costello and the Attractions) but also think fans of John Fogerty, The Smithereens and The Replacements will embrace Mullen’s exceptional skills. His kickoff to a new chapter in his career, is on solid ground.

The music of Tom Mullen has been heard all over the world in partnership with the radio plugging services offered by Musik and Film Radio Promotions Division.  Learn more https://musikandfilm.com