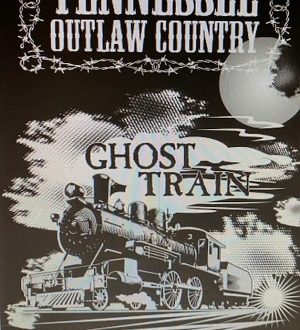 The foundations of country music are still quite relevant in 2022 despite an influx of experimentation coming out of the genre’s unique underground both in and outside of Nashville, and I think this is quite evident when listening to the new Matt Westin single “Ghost Train.” Although Westin is accompanied by the hard-hitting Tennessee Outlaw Country, he’s very much in command over the creative direction of this piece, and his bucolic approach to harmonies definitely gives the rock n’ roll aesthetics of the track an extra dose of cowboy charisma that you wouldn’t find coming from anywhere else but a true country crooner.

Westin’s lead vocal is what owns the identity of this single more than anything else, but he’s careful about overindulging with his harmonies in the chorus. If anything, when he gets to the climactic fever pitch of this performance, he steps back a bit to let the grind of the guitar and the bass gain some ground in the spotlight, if only for a moment. There’s a lot of tension here that doesn’t go unutilized, and where some would chalk this up to the rock influences over the song, I think it has much more to do with this singer’s dexterity as a frontman.

Tennessee Outlaw Country’s instrumental hook is far from the over-the-top liberal aesthetic we’ve been hearing from a lot of other crossovers in 2022, and I would even say that its conservative stylization affords Westin that much more room at the top of the mix to flex as a singer. The give and take between the players in this track is something that impressed me right from the start of the song forward, and even if it’s their lone collaboration, I think it’s going to have an impact on how a lot of critics and fans appreciate their individual work.

There isn’t a lot of kick in the backend of this single, but personally, I don’t see where a fatter bass element would have done the band or this vocalist any favors. Truthfully, I think Westin does a little better with a hearty guitar component than he does a bigger, bolder groove than what his rivals have been toying with this year, and while it might be interesting to hear him experiment with thicker bottom-ends, it makes sense why he’s sticking with the simpler side of compositional concepts here.

I hope this isn’t the only time that Tennessee Outlaw Country and Matt Westin get together to make some music, and if you take a peek at “Ghost Train” this March, I think you’re going to be inclined to agree. There’s a lot of quality country-rock coming out of the woodwork at the moment, but little of what I’ve heard has held onto the spirit of the old school in the genre as well as this group does while still keeping one foot firmly planted in the future. Matt Westin has seemingly done it again, and I’m quite intrigued by the notion of what he might come up with next.