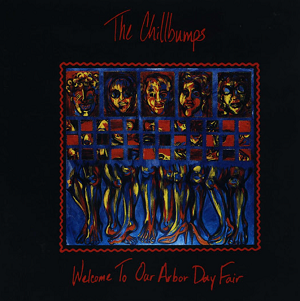 The Chillbumps “Welcome to Our Arbor Day Fair” (LP)

Bands like The Chillbumps litter rock and roll’s long history. The Alabama-based five-piece first formed in the late 1980s and, at first, devoted themselves to covers and playing the college circuit in the American Southeast. Auburn University students themselves, The Chillbumps did eventually record one album of originals in 1991, Welcome to Our Arbor Day Fair, at Atlanta’s Exocet Studios. It includes a dozen tracks filled with alternative, pop, and even punk influences.

The thing that sets Welcome to Our Arbor Day Fair is the individuality The Chillbumps work into the album’s twelve tracks. “Function Junction” takes several of the threads running through music in that pre-Nirvana world and weaves them into something familiar, yet unique. Vocalist David Borel exudes front-man energy even on a recording without dealing in any “look-at-me” histrionics. His voice proves remarkably elastic as well moving from a dismissive half-mumble during the initial verses into full-throated passages later on.

The jangling acoustic roll of the third track “I See You” hooks listeners. It is a sprightly track as well with drummer Tim Bryant supplying more than ample bounce and has strong songwriting instincts that keep it from going too long. The Chillbumps are obviously working here with an ear turned towards potential radio play. It’s to their credit that they are checking off such boxes without ever losing their individuality in the process.

“Happy Bass Riff” is, natch, built around bassist Jeff Niebuhr’s cheerful-as-advertised playing. Building a song around a moment such as this takes skill, but The Chillbumps find the target. It’s one of the best melodic numbers on Welcome to Our Arbor Day Fair and in keeping with the tone of the album. There’s a period feel listeners may spot from time to time as the album progresses. One of those songs is the character piece “Alice”, but crucial distinctions remain. There’s a slight downbeat tone in the way they contend with this song; the confluence of lyrics and guitar basically tells listeners that, whomever Alice is, she’s bound for more trouble.

There’s an English/European feel coming from some of the other tracks. “Ashes” is an outstanding example of that influence making its effect felt on the album as it sounds like it may have hailed from Manchester, circa 1984, rather than south of the Mason-Dixon line. “Jubilee”, distinguished by another strong Niebuhr bassline, invokes the punk influence referenced earlier in the review. It’s one of the best later songs on the album.

The finale “Human Race” is one of the album’s most daring moments. The Chillbumps slightly psychedelicizes their musical vision and emerge with a recording that sounds deceptively ramshackle at times. There’s far more going on in terms of post-production effects, but it doesn’t dilute the song. The Chillbumps circa 1991 are gone now, but the album they left behind still stands as representative of its time and remarkably fresh in 2022. All things old are new again, but it helps when you have the fundamentals down as they do here.