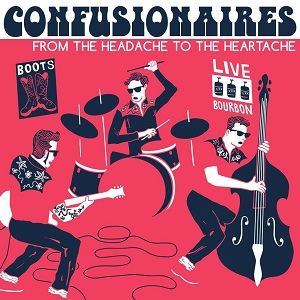 The Confusionaires’ Release “From the Headache” (LP)

Canadian artists have been racking up a lot of positive publicity in 2020 on the strength of their putting a new spin on traditional Americana, and though I’ve caught myself getting intoxicated off of their experimentations quite often this fall, few records have left me as impressed as The Confusionaires’ From the Headache to the Heartache has. Led by its star single “I Got a Heart,” From the Headache to the Heartache is a swing-happy, distortion-filled chest-beater of a rockabilly affair, but its Americana elements are perhaps what make it such a warm and listenable LP even after a couple of dedicated spins.

The tracklist here is admittedly streamlined to the point of expelling tension from the grander scheme of things, but the excessive catharsis we find in tunes like “Look at Me Now,” “Side Dish,” “Romantic Mystery” and even the rather melancholic “One Less Cowboy Out on the Range” works well for the overarching lyrical theme we find in other songs, such as the record-starting “Many Miles to ‘Go” and “I Ain’t Goin’ Home With You.” Obviously this wouldn’t qualify as a rock opera, but honestly I think The Confusionaires show us that they have the capacity to make something that complex just with the continuity of the content in this LP.

“Side Dish,” “Sour Mash” and “I Got a Heart” give us some sexy duels between the percussive component in From the Headache to the Heartache and the spotlight-drawing electric guitar, and even at their most profound, loud and proud, the battles remain as amazingly tight as we could hope for them to be. There’s no laziness welcome in the mix of this album, and for that matter the structure of any specific composition here, and that just isn’t something that is common in the (limited) mainstream angle of rockabilly anymore.

Between the headiness of the bass and the nimbleness of the guitar in “Sometimes I’m Bad” and the opening trio of “Many Miles to Go” / “Blue Enough for Two” / “I Like Cars!,” there’s not a single patch of audio in From the Headache to the Heartache that fails to showcase the abilities The Confusionaires possess when they’re playing off of each other’s cues – seemingly, I should add, in an improvisational fashion. It would be interesting to know how many of these compositions were conceived in live jam sessions, and if my gut is right, the majority of them probably were.

I think The Confusionaires still have a lot of ground left to cover and growing up to do before they’re going to be able to wage a serious campaign for international stardom, but they give their fans something smoking to sink our teeth into with the release of From the Headache to the Heartache that I would recommend by all accounts. There are no easy paths from the Canadian underground to the big leagues down in California or New York, but this is a band that is showing their contemporaries just how big an impact you can make with the right combination of muscle and melodicism.