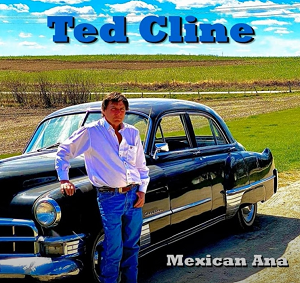 There’s plenty of romance and atmosphere to be found, felt, and heard in Ted Cline’s new single “Mexican Ana”. This respected veteran of the country music world has only recently made his first forays into the solo world and his tenure playing alongside formidable artists such as Ernest Tubb, Chris LeDoux, and George Jones has served this Kansas City based artist well. He has established a much deserved reputation as someone capable of bringing a retro-themed approach to country music with present-day production values and he isn’t afraid of mixing other musical influences into his work. “Mexican Ana” is a perfect example. Cline doesn’t just embrace a south of the border feel in this track, it immerses itself, and boasts a veracity of sound and songwriting that all but the most cynical listeners will take to their hearts.

There’s no doubting his honesty. Cline’s “Mexican Ana” is as straight-forward as songs can be, really, with a solid narrative thread uniting the track as a whole and well-recorded instrumentation that never tries cheating the listener. You will hear no cheap gimmickry during “Mexican Ana”. The song never hides behind production tricks or meaningless fluff. It has an understated humanity listeners will likely respond to with a first listen and even those who ordinarily dislike roots music like this will likely enjoy Ted Cline’s talents.

Melody plays an important role in lodging this song in the brain. Cline wraps his arms tight around the Spanish-influenced guitar melodies and the tasteful, precise drumming that nonetheless gives the song much of its impetus. Other instrumental touches along the way provide colorful accents to the track and help make it an even more satisfying listening experience. Taken together, the individual parts create an inexorable sweep dragging listener’s along, far from against their will, towards the song’s final curtain.

The song’s running time, a hair over three minutes, is an indication of something. It’s evidence for how those years playing alongside some of the genre’s brightest talents shaped Cline for moments such as this. He understands, to the marrow of his being, what makes this music work. He has a keen appreciation, as well, for what audiences want to hear and dragging this song out unnecessarily would only alienate and turn away the sort of people who value songs like “Mexican Ana”.

We’ll be hearing more from Ted Cline. He’s a lifer. This is a musical artist who will be thinking about and working at his craft until the day he dies. “Mexican Ana” is full of the sort of thing you can’t teach, you are either born with it or else it never rings true for long, and that’s passion. It burns bright with this release.

The music of Ted Cline has been heard all over the world in partnership with the radio plugging services offered by Musik and Film Radio Promotions Division.  Learn more https://musikandfilm.com