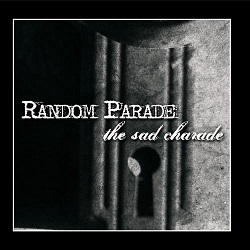 Though sharp and occasionally verging on atonal territory, the distortion element in Random Parade’s “Cynic” is as crucial a contributor to the narrative in The Sad Charade as any of the lyrics here are – if not more so when it really matters. Layer upon layer of gritty synthesizers and guitars are waiting to carry us away from reality to a place of unspeakable lust and self-awareness in this throwback to 2010, and while it’s true that a lot of quality post-punk has come out of the woodwork in the ten years since, this record remains as much a winner today as it did the day it was released.

There’s a lot of sonic depth to be enjoyed in The Sad Charade’s deep cuts like “Daydream,” “Mirrors,” “No. 1 Crush” and “Sad Charade,” each of which feel more multidimensional than most anything the rock establishment has been responsible for lately. A full-bodied counterpart to the lyrics, the instrumentation throughout this LP tells its own story, never putting too much pressure on the vocal to singlehandedly push the narrative on its own. There’s too much emotion to make that kind of a record here, and it’s clear to me that Random Parade knew this coming into the studio.

“Unstable,” “Slip Into a Spell” and “Churn, Spin, Shake” are boasting some really heavy pop polish, but I think it was necessary to give their detailed elements a little more of the spotlight than they would have been able to attain in a different scenario. It’s almost as though Random Parade were intentionally trying to overproduce different parts of this album for no other reason than to utilize the sterility of a studio-centric sound. It’s counterintuitive to the post-punk ethos on paper, but in execution, it’s everything that I would want an alternative rock band to be doing now, in 2020.

“Start & End,” the aforementioned “Cynic,” “Sad Charade” and “Reason” borrow some of the atmospheric tones I would associate with Neurosis or Ox-bow, only repurposed with a dynamic pop sensibility you would never hear from either of those two groups. There are some occasions on which this band don’t hesitate to wear their influences on their sleeve, but generally speaking, nothing in The Sad Charade feels indebted to anyone other than the players ten years later. It stands alone, and in a way that doesn’t leave the morals behind its creation open to our individual interpretations.

Those with a taste for darkwave at its most radio-friendly needn’t look any further for an unabashedly classic listen this autumn than Random Parade’s The Sad Charade, which definitely ranks as one of my favorite old school records I’ve revisited in the past month. Sometimes it takes a little time for a critics to give a band their due time in the spotlight, and I think this could absolutely be true of the California crew who made this phenomenal LP back in 2010. They’re finding a second life this year, and their debut album’s ongoing relevancy is the biggest reason why.

Share
Previous Musik and Film Delivers World Wide Radio Promotion, and So Much More…
Next Grand Nathaniel “At The Lagoon” (LP)