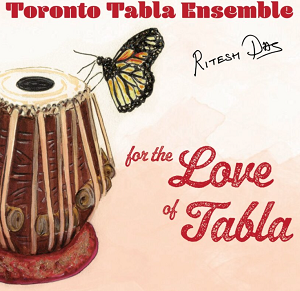 Toronto Tabla Ensemble “For The Love Of Tabla” (LP)

For The Love Of Tabla opens with fast-paced “Encore 21.” This track features mind bending polyrhythmic vocals from Das and a galvanized tabla. Toronto Tabla Ensemble throws you headfirst into the power and magic of the tabla with “Encore 21.” From the moment it begins, Das transports you into another realm. There’s something about the tabla that gets your blood pumping. I found myself wanting to move my body the longer I listened to the percolating tabla. The tabla seems to permeate the muscles first, you’re registering its heartbeat like nature with your ears, but its speaks to your body. Listening to For The Love Of Tabla is a full body experience. There’s no way to sit back and let it wash over you, the tabla grips you and doesn’t let go until its over.

While some of For The Love Of Tabla’s songs are instrumental, the use of vocal recitation and singers add new possibilities for where the tabla can take you. “Summer 2020” is a good example of Das’s vocal recitations working with the tabla. The rhythm that is created by Das and the tabla in “Summer 2020” is captivating. The flute that comes in adds another layer to the song, deepening its hypnotic effect. One of the most remarkable songs on For The Love Of Tabla is “Shyama Sundara.” It features singer Labonee Mohanta’s haunting vocals against the sitar and a deep and earthy tabla. “Shyama Sundara” is beautifully arranged, the depth that the tabla reaches, you can feel in your bones. It’s hard to believe that a song so cohesive, came together remotely.

It’s been Das’s desire to take the essence of classical North Indian music and blend it with other styles. This often results in intricate grooves, lively energy, and a hypnotic sound that is unique to Toronto Tabla Ensemble. Although it comes as no surprise, that these songs don’t come together overnight, you could argue otherwise. Every song on For The Love Of Tabla is so succinct and cogent its hard to believe how many collaborators went into it. More often than not the songs feel like they’re one instruments rather than multiple, even the vocals sound like its coming from the tabla itself. The unison is what makes For The Love Of Tabla so mesmerizing.

For The Love Of Tabla was born from a love so deep it permeates every track. Its impossible not to feel the love for making music and the tabla itself when you listen to this album. Whether the tabla is being playful and carefree or is taking a more deep and enriched role, it promises to take you elsewhere. For The Love Of Tabla is an incredible album that will introduce listeners to a whole new world of music and the power of love.