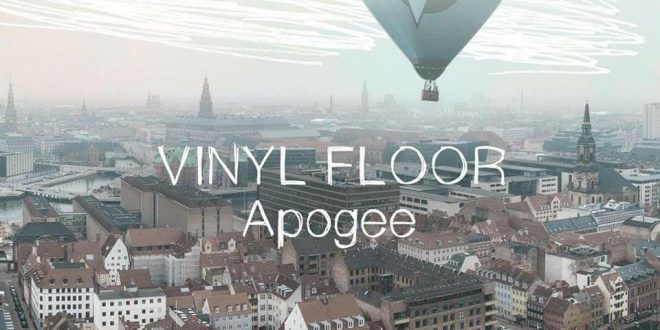 In their song “Tidal Waves,” Danish hard rockers Vinyl Floor unleash a swaggering ballistic blues anthem like the year is 1973 and they’re trying to make a name for themselves in the Motor City, but this isn’t a bit from one of classic rock’s more sterling albums of yesteryear. This is a slice of pure sonic gold cut straight from the bones of Apogee, Vinyl Floor’s upcoming follow up to the critically acclaimed Vaudeville, and fans of the group won’t be disappointed by the velocity of riffage that they’re bound to find in the ten songs packed inside.

Vinyl Floor have been doing their thing for years, but I think they’ve really come into their sound with Apogee, which serves to be their most DIY outing since their debut album. Sometimes it takes bands a few tries before they’re able to hammer out a piece of music that really encapsulates their identity and sound to its full potential, and that is exactly the case with Apogee. There was never any question that this was a record they would eventually record, it was always just a matter of what setting they would choose to release it in (I think the timing couldn’t be better).

Someday, the stone cold “Acid & Wine” will be considered a classic rock tune dated to the 2010s, but I think it’s going to age with the same vibrancy that “When the Levee Breaks” has. When you hear a song that is as potent as this one, there’s no doubt whether or not it’s going to become a staple of its format. All the cues and trademarks of an icon are present, from the vocal harmonies all the way down to the stumbling bass that can’t help but evoke images of the garage rock bands that eventually gave way to punk after years of acrimonious cultivation.

I believe that Apogee will be the record that makes Vinyl Floor a household name for indie rock fans in America. The United States is a notoriously difficult market for European artists to break into, and Vinyl Floor have had their share of struggles trying to introduce their dexterous tones to western audiences, but in Apogee they’ve produced something that is so naturally relatable to American rock fans that I wouldn’t be surprised if it got mainstream airplay more than it does on college radio or even specialty indie stations.

You don’t have to be a lifelong rock n’ roll fan to be able to appreciate the awesomeness that Vinyl Floor has cooked up in Apogee, and I’d actually challenge anyone who genuinely hates rock to give this record a shot and see if they don’t change their mind. This is a very interesting time in music, and bold artists making bold statements are going to be the ones to rule over the hierarchy in pop for the next ten or twenty years. Vinyl Floor has declared their candidacy to reign over all others with Apogee, and as of this moment they’ve got my vote firmly locked in.