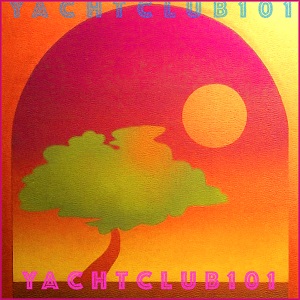 It’s a rare thing to have a sun-kissed synthesizer harmony and sticky bass guitar riffs, let alone adding into that mix some quirky beats and a vocalist that knows his way around the lyrics. Such is the case for Yachtclub101 self-titled release. The 10-track sonic odyssey is dripping with feverish, pelting rhythms that sometimes shiver like twinkling lights.

Yachtclub101, the moniker of Scott, a transplant from Bennington, Vermont to Oakland, California, started several bands before this project. Perhaps the most well-known , The Lovemakers, scored a regional hit with “Prepare for the Fight” from a 2005 Interscope record. Parsing his time between other projects, including playing drums for a Gun Club tribute with Debbie Harry and Nick Cave, co-wrote a song with Chris Stein (Blondie), did a mashup with 50-Cent and contributed to countless Bay Area records. Yachtclub 101 is now embarking on a goal of three records in three years. Hell bent on living for today and not having tomorrow promised, the virus, the loss of his club in Oakland and the loss of a close friend, has him focused on music and creating art. Paramount is providing joy and happiness to his listeners.

He’s successful. Even when his voice is pining, the yearning has a positive spin. From the first track (“This Too Will Pass”), where Scott synth motion is circular like a lollipop, to the halfway point “No New Friends” where the motion is just upbeat and ecstatic to the last track, “Last Call” whereas Scott’s youthful vocals wrap around a bit more intense synth bed. Maybe I’m just easily intoxicated by Scott’s profuse use of the synthesizer (guilty as charged), but even when the murky sonic waves hit, they feel like something momentous is on the cusp of happening. You – gonna set the world on fire, Scott sings in the choppy-beat “Nothing They Say”. That one line solidified the entire album for me. He uses the word ‘you’ quite a bit in his lyrics and in this particular song, the second track nonetheless, he sets the stage for that bubbling spirit within all of us. Look, the world looks way different in the year 2020. Yachtclub 101 reminds us that music is the great healer the great communicator.

I’d also like to highlight the track “Give It To Me” with its bouncy industrial strength synth. I see the (or ‘a’ it could go either way what he’s saying here) part that you’re showing, and that’s the part I want knowing, Scott sings. His voice is amped up, a bit grittier in its delivery. He’s not as aloof. This song screamed evening to me, or early, early morning hours. There’s a seductive rhythm happening.

Fans of LCD Soundsystem, Grouplove and MGMT will be mighty happy listening to each and every one of the 10 songs on Yachtclub101’s self-titled release. Scott, one down, two to go and you’re starting out in the win column for your quest to make listener’s happy. Bravo to your whit and your whimsical ways.