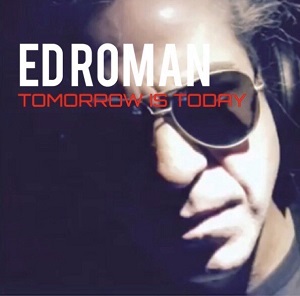 “Tomorrow Is Today” is the latest single from Canadian singer/songwriter Ed Roman. The rocker takes a few cues from The Foo Fighters and John Cougar Mellencamp in his approach, but uniquely takes the baton and rolls with this. “Tomorrow Is Today” rounds up a murky music bed with a rock music bed that pushes boundaries. Add into the mix a lead singer with a great front man voice and this is the song that gets you going in the morning. “Tomorrow Is Today” is a rock and roll game changer.

Yesterday’s gone, tomorrow is today, Roman sings in the song’s chorus. At first I wasn’t certain if the Hammond B organ was singing away with the music bed. It might be a frightfully fun synthesizer, but either way, the backing music is a mix of psychedelic soul and heavy reverb. In between those moments are sticky bass guitar riffs, whereas you can almost hear the bass slapping. The bass grooves are intensely fun and reinforce that vigor, that extra ammo needed to make the day count. Why put off until tomorrow, what can be done today, the bass guitar rhythms suggest.

It’s not a new concept to sing about not wasting time, after all, we’ve heard the same topic come from such greats at The Flaming Lips (“Do You Realize”), Pitbull (“Feel This Moment”) and Janis Joplin (“Get It While You Can”), and Roman really uses this universal theme to his advantage. Roman, who hails from Shelbourne, Ontario, Canada, is also the singer behind the red hot single “Stronger”. What you start to unravel from his work and his artistry is a man that has a pulse on what make rock/pop/alt rock so enthralling, but his own spin on things. I like that his voice has a bit gravel thrown in, it makes it more interesting. While I do think he presents his work like the aforementioned Foos and Mellencamp, he also has a bit of Buster Poindexter and Bruce Springsteen stewed into his brew. Needless to say, his voice, especially keeps the song very interesting.

A billion miles left to go, Roman continues. When he sings this line, I’m reminded of the idea that we think we have many years ahead of us. As we’ve all learned in the past year, that isn’t always the case. I think we will be seeing a lot more songs like “Tomorrow Is Today” that reflect the global psyche. We’re hurting. It’s rocking songs like this one that help us escape, but keep us tethered to reality and a foundation. Roman is ahead of the game and releasing it now feels like the perfect gift walking into the holiday season and year-end rankings. If I were to take a guess right now at where “Tomorrow Is Today” in my own personal favorites for 2020, it would be very high. The music bed and Roman’s voice delivery are too special to ignore. I think if you’re looking for a song to crank up while driving to get lost on the highway – “Tomorrow Is Today” should be your go-to.