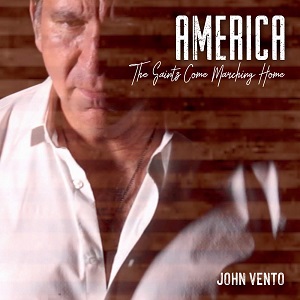 When John Vento sings, the sound of thunder and a roaring assembly resonate in his deep-baritone voice. Vento’s new track “America (The Saints Come Marching Home)” is a resounding, sing along with rich harmonies and even stronger grit. “America” saddles together the steel-neck guitar of outlaw country and blends it with the fiery rebellious spirit of rock and roll, with a side of Americana. Vento might not be a household name yet, but the impassioned lyrical content in “America (The Saints Come Marching Home)” is a biting reminder that times are indeed a changing.

A stubborn guitar, a restless churning of the percussion folded into the mix, Vento’s new track has semblances of Native American chants imbedded into the politically-charged song. America, America, the saints come marching home, the holy ghost is on his knees, crushed by sticks and stones, he sings. Vento, a humble singer, is based in Pittsburgh, Pennsylvania. You can tell just from this song alone that he’s a hard-working singer. The sweat and elbow grease he puts into each note is palpable. He’s also the front man for rock bands The Businessmen and Nied’s Hotel Band. Those years of slinging songs from stages of all sizes come into play on “America”. Just like the Grand Canyon itself, Vento invokes the bigger-than-life draw. The drumming, accompanied by a flute, gallops along like a herd of buffalo. Picking up dust on the backs of the weak, he sings. That guitar, swelling like Jon Bon Jovi in “Wanted Dead Or Alive” but laced with a bright melody, inches its way into your brain. Behind him, besides the full sound, is a female voice harmonizing. It’s a nice balance, a layer of sunlight that darts through this somewhat stubborn shell.

Aristocrats above the hungry and the poor, Vento continues. He’s communicating to the listener that things are not only amiss, they are amuck. Things are really falling apart and I think what he’s inferring with the Native American chanting and meditate state (hey, hey, hey), is that our ancestors and Mother Earth are upset with the imbalance. As a listener, you become aware of the darkness, the dire warning in this song. It’s upsetting to know this is the state-of-things, but there is hope. I think the beautiful, airy female vocals in the background represent that resilience. The moxie of the American spirit.

“America (The Saints Come Marching Home)” is a battle cry. It’s a fierce and sober reminder that the United States is far from reaching utopia. This great experiment is on shaky ground, but hollowed ground, nonetheless. It’s artists and modern poets like Vento that put to song what is brewing, bubbling at the surface. This hauntingly beautiful song is full of energy. I can’t deny that I wanted to hear more of the energy and fixated my attention on the edgy Vento vocal delivery. He’s the real deal in more ways than one; he’s genuine. You can’t buy or fabricate what Vento is delivering. “America (The Saints Come Marching Home)” is a stunning song with so much to offer the masses.