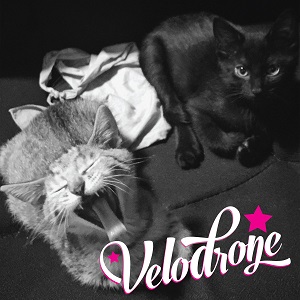 Resisting the darkness with a powerful but grainy groove that keeps coming at us before slowly descending into a pendulous sway, “Love Race” makes it known inside of its first forty seconds what kind of a rollercoaster ride we’re in for when listening to the self-titled debut LP from Velodrone this fall, but if you can handle the heat of this opening track, you’re going to love what comes next. From here, we’ll sink into the thick but exuberant trenches of “Reality” only to get lost in the melancholic grunge balladry of “Elated” less than three minutes later. The tempo exhibits venomous bipolarities while the vocal harmonies punctuate the white noise in the backdrop with pure melodicism, but through all of the chaos there lies a band with a lot of potential and ability when it comes to writing smart alternative music.

“Elated” feels a little too In Utero-ish to be anything other than a brooding ballad segue between “Reality” and “Together,” but in the totality of its tracklist I don’t think this record can be described as giving quarter to any filler that I would normally have to hit the skip button over. “Together” spruces up the moderate pop themes of its predecessor just in time to cut us with a punk rock enthusiasm in “Voyeur” that might be one of the most exciting emotional releases of the whole LP. There’s not much sunshine peeking through the clouds here, but even so, the flow of the music keeps our attention no matter what we’re spinning in this album.

“Black Cat” isn’t quite the burdening bad omen its title would have you think it could be, but instead an homage to L7 that spits fire in our path – perhaps to spotlight the versatility of the creepily crisp “Harvest Moon,” the most sonically provocative piece of material that Velodrone have included on their debut record. This song and “Believe” couldn’t make for any stranger a couple here, but if they weren’t backed by the five minute-long “Sleepwalking,” I don’t think they would feel quite as progressive and, dare I say, artsy as they do in this scenario. This is a hard band to figure out, but not because of a lack of artistic clarity – in my opinion, they’re simply too bold an experimental project for small-minded critics to completely understand.

Velodrone’s eponymous rookie release concludes with the noise rocker “Wysiwyg,” and though it’s a short and guttural way to cross the finish line, I think this song was the perfect track to take us out here. It’s an amalgamative hurricane that drifts into the ethers with an almost understated violence behind it, and when it’s all over, the groove the song works off of is still lingering – distantly – in the air around us. I had no clue what to think when I read a description of what Velodrone’s debut was going to sound like, but now tasked with the same request myself, I can honestly tell music fans that this is one of the first post-grunge records I would categorize as too irresistible to put down. It’s a diamond in the rough, and I think other rock buffs are going to agree with me.