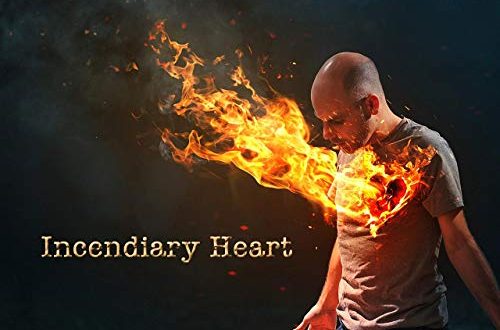 Surreal and soft as silk in “The Flame (featuring Kerry Ironside),” robust and yet gentle in “Planet 8 (featuring Sharon Court),” the string play in Andy Michaels’ new album Incendiary Heart is a cornerstone of the record’s charisma, but don’t get me wrong – it’s but one component in the multifaceted splendor that this tracklist has to behold. Michaels puts a lot of effort into making the instrumentation as powerful an entity as any other is in Incendiary Heart, and if you thought he was going to do anything less intriguing than this, you’re in for quite the surprise here.

In Incendiary Heart, Michaels avoids repeating the same compositional techniques over and over by making sure to align every track with a uniquely melodic underpinning. For example, while “This Songs for You” and “Rambling Man” have a lot of constructional similarities, they each come outfitted with an unrecycled rhythm and sway, as if to present a shared concept at different speeds (and thus colorized by different emotions). It’s a complicated way of making pop music, but there’s no denying that it’s something none of his rivals on the mainstream side of the business have been toying with lately.

“Night and Day,” “Humming Bird,” “I Can Fly,” “Fireflies” and “Only Love Knows the Meaning of Goodbye” depend on a lot of aesthetical contrast to make a big impression on us, versus the Tiarna Madison tracks (the title cut and “Emerald Eyes”), not to mention “Only Change Stays the Same” and single/music video combo “Darling It Hurts,” are more fluid in design and concept, but I don’t think that Michaels was spreading himself too thin in incorporating such a conflicting group of songs together in one disc. If anything, he’s showing some legit moxie in this record, and exhibiting an attribute that many indie artists could learn a thing or two from, especially nowadays.

From a lyrical perspective, “Sticks and Stones (featuring Carolyn Thomas,” “The Flame” and “Only Love Knows the Meaning of Goodbye” are some of the more conservative tracks Andy Michaels has ever stuck his name on, and I for one like what they display for us on an artistic level. He doesn’t want to hide behind a lot of predictably enigmatic verses in Incendiary Heart – he’s coming out in front of the music and leading us into a diary of self-awareness without anything to come between his narratives and our ears, and unfortunately, that’s an act worth commending in 2020.

Tailored to the needs of a contemporary audience almost exclusively, Incendiary Heart might not be the most forward-thinking record you’re going to hear this year, but it’s definitely one of the most fun, and easy-going, pop releases that you can expect to get ahold of before the spring season breaks. Lovers of good ol’ fashioned harmony and hybrid grooves needn’t look much further than this for a killer tracklist adorned with as much cosmetic beauty as it is genuine substance, and if you’ve never taken the time to hear his music before, I think this would serve as a great way of getting to know Andy Michaels as an artist on the rise.

User Rating: Be the first one !
Share
Previous Ronnue rises to Seattle’s #1 independent artist of 2019
Next Flat River Band releases new album Every Dog Has Its Day