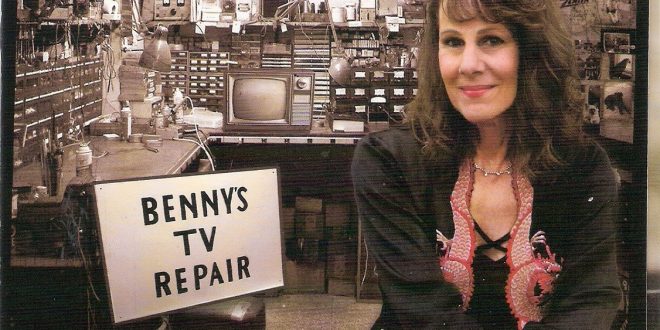 With a fiddle’s excited cry, “Something About A Train Sound” starts off Irene Kelley’s Benny’s TV Repair with a swinging optimism set to a bluegrass harmony unlike any other we’ll hear in the other ten songs on the album. At the end of this track, we immediately jump into the simplistic strut of the tender “Bluegrass Radio” which, much like “Cabbage Head,” has a lot to tell us both lyrically and instrumentally. “Cabbage Head” is a little more forceful, but beside the icy “Thunderbird,” most anything would be; in this song, Kelley gets as cold as she ever has in a brittle country tune that is texturally evocative and more vulnerable in tone than I was initially anticipating it to be. It isn’t the only surprise in store for us, but it’s undeniably one of the more memorable.

“Out Of Arkansas” looks and feels more like a folk song than it does a country/bluegrass hybrid, but it doesn’t make the title track’s classical sound seem too archaic for the tracklist overall. Alongside “Highway Back To You,” “Out Of Arkansas” is an example of the experimental strain of modern bluegrass artists like Kelley have been perfecting in the 2010s, and if they’re offering us any sort of indications as to what the future is going to hold for this style, I would say there’s more to be intrigued by among the genre’s top talent now than there was at any other time in the last ten years. This isn’t because of Irene Kelley alone, but she’s certainly an important role player in the movement nonetheless.

It’s the shortest song on the LP, but “Anything To Help You Say Goodbye” has a bluesy bluster that makes it feel as big as a skyscraper. It’s a similar situation with the three minute-long “The Hills Of Home,” but in the case of this latter track, the steady flow of the verses makes it seem a little more streamlined than the other compositions near the end of Benny’s TV Repair do. There isn’t any negative indulgence here, and though the black and white structuring of the material can get a little repetitive in the middle of the album, it’s completely smoothed out by the time that we get around to “Faster Than Angels Could Fly.”

In “Faster Than Angels Could Fly,” Irene Kelley takes us into the sunset with one last swing-powered bluegrass song before letting her balladic side bring us on home in “Walk With Me Today,” the last track on Benny’s TV Repair. I’ve cherry-picked this tracklist a lot lately, but I actually think this is the type of record that is best experienced in its entirety, without any interruptions to cloud the listener’s interpretation of the many-splendored narrative it encompasses. Benny’s TV Repair isn’t a concept album, nor is it a progressive affair, but it tells the tale of an emergent subgenre in bluegrass that is taking shape before us in real-time as 2019 fades away and 2020 replaces it. Kelley is an important artist to watch right now, and that’s undebatable after hearing this most recent studio offering.

User Rating: Be the first one !
Share
Previous Hunting Memories – the 20 song album
Next Jon Gonzalez