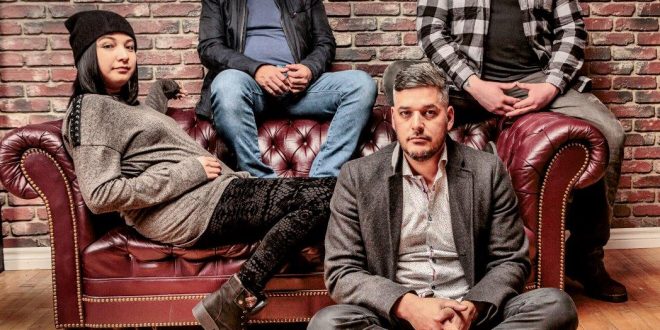 Canada’s own Midnight Shine get experimental in their new single and music video, a cover of “Heart of Gold” (originally by Neil Young, for those few who aren’t already aware), with debatably affective results depending on how you choose to consume it. The song starts off familiarly, to such a degree that, without the accented vocal track over the opening bars, it would be hard to differentiate one version from another when comparing it with the classic. The guitars get bigger and bigger until they’re practically pushing the vocal off of a ledge in the first few verses, but there’s a physicality to the music that keeps us focused on where it might take us next.

The video is kind of scattered in terms of its synchronized shots, and definitely lacks the cohesiveness of its source material. The film grade is sublime, but that isn’t enough to make up for the rushed feeling that we get as we move from one image to the next. In essence, the concept behind the video is cute and pretty plain on its face, and that could be my biggest problem with it. It’s a little too generic, too underwhelming, for me to be able to tune into anything but the music playing in the background.

That’s where we get into stickier territory. The onset of “Heart of Gold” is confusing and overcomplicated, but once we get into the meat and potatoes of the track, something decidedly different happens. The chorus blossoms like a spring flower, and there’s a catharsis that releases all of the tension that was stirred up by the bassline in the intro to the song. I was very impressed with this single when I gave it a casual listen a few days ago; which is, most likely, why I came to expect something more potent in the video.

The one structural issue that I have with the music in this cover is related to the master mix. There’s more of a kick in this tempo than there is in the old school version of “Heart of Gold,” and that’s not a problem for me – the issue lies in the way that the drums that provide this kick are layered in the mix. If they were stacked up next to the vocal instead of under pretty much everything in the instrumental portion of the song, I think they would have been even more evocative in the big picture. Regardless, they’re still among the finer points in the track – even if it they are pointlessly muted.

“Heart of Gold,” the music video, isn’t Midnight Shine’s most shining moment by any stretch of imagination, but the song that gives it its best attribute is nevertheless a strong statement from an equally strong group of musicians who have come a long way since first debuting in their scene. They’ve yet to receive the international spotlight that they’ve been working so hard for, but if they keep on this present trajectory, it’s difficult to see fame and fortune evading them that much longer.

User Rating: Be the first one !
Share
Previous Charlie Marie’s self-titled extended play is a tough act to follow this spring
Next Victor Pedro – Call Me I Need Ya