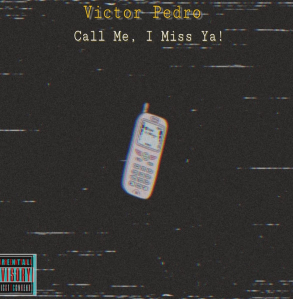 Victor Pedro – Call Me I Need Ya

Nigerian Afrobeat/R&B performer and songwriter Victor Pedro draws from a variety of influences for his unique brand of pop music like Chris Brown, UB40, Wizkid, and others. Based out of South Africa, Pedro has experienced considerable success since his 2013 debut, but Pedro has blazed a trail towards global recognition since the tender age of thirteen. To be driven towards success from that young age is a testament to his passion – it risks cliché, but it is clear Pedro is born to write, create, and bring his musical vision to the widest possible audience. His latest single “Call Me I Need Ya” provides stark and entertaining evidence of this fact.

It opens with evocative atmospherics and a smattering of horns. Some female supporting vocals call out the song title with smoke-laced suggestiveness and there’s light percussion introduced creating a near gossamer groove that light keyboard and synthesizer lines pepper with colorful effect. Adding those additional backing vocals contrasts nicely with Pedro’s voice and never distracts. The song has satisfying focus – it runs just a little over three and a half minutes long and doesn’t vary much once the groove is established, but few ;listeners will turn away from this track feeling let down. Instead, it sounds like Pedro entered the studio for the recording of “Call Me I Need Ya” convinced about exactly what he wanted to accomplish and there is no dross or self-indulgence diverting him from that goal. Such artistic certainty is typically the providence of veteran artists and it is further evidence of the exceptional skills and talent Pedro brings to the table for modern audiences. Nothing is overwrought or overplayed with this single.

His vocals possess the same smoke-laced suggestiveness we heard from the female performers, albeit manifested in a different fashion. He has obvious credentials to succeed as an Afrobeat performer, but his voice likewise boasts considerable R&B chops more than capable of matching up with the aforementioned influences in the first paragraph of this review. Pedro’s singing locks in well with the musical arrangement; they are working in full sympathy with one another from the outset and nothing, including his phrasing, ever sounds forced. His lyrical content is, perhaps, the most underrated facet of Pedro’s presentation – many listeners will be surprised by vulnerability and emotion coming off every line and his vocal talents realize the full potential of the writing without ever dragging the song into bathos.

Victor Pedro’s work stands among the forefront of modern Afrobeat music, but it crosses all borders and reaches for a vision of R&B music with worldwide relevance. His confidence is palpable throughout every second of this tune without ever slipping into stridency and seems to be growing with each additional release. “Call Me I Need Ya” is one of the best singles this year in a R&B vein and shows listeners Victor Pedro’s growth as both an artist and man continues unabated while exponentially expanding his musical profile. It has everything lovers of this style cherish and enjoy.