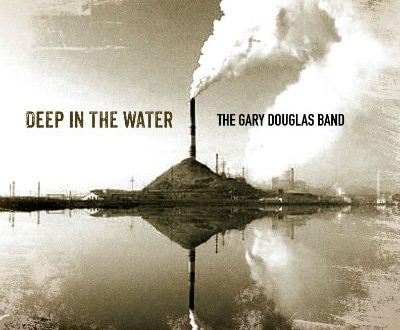 Deep in the Water LP by Gary Douglas Band

The single “River Road” is what got me hooked on the Gary Douglas Band, and the album from which it was spawned, Deep in the Water. Deep in the Water might as well be a greatest hits disc encapsulating every great country song that should have been released between 2008 and 2018 but never was, partly due to shrinking talent in the country scene, partly because no one with talent had the creative gumption to get it done. But the Gary Douglas Band isn’t letting us wait anymore. This October they’re releasing a musical tour de force with Deep in the Water and taking the world along with them.

A lot of people will disagree with me, but I think that Gary Douglas is a lot more of an alternative country artist than he is a mainstream one. His sound is adjacent to the alternative rock themes that inspired alt country, and he never goes out of his way to get into the beer drinking, patriot plugging, archaic values that are constantly spewed by country music’s established acts. In a day and age where “alternative” doesn’t mean much in music, the Gary Douglas Band stands out from the pack and produces an alternative source of Americana that is awfully hard to turn down.

“Won’t Say No” will melt your heart, “Oh My Oh My” will make you want to dance and the riveting “River Road” will make you want to throw a bag of clothes into the trunk, grab a pack of smokes and a cup of coffee and hit the open highway in search of something real out there. The bottom line is that Deep in the Water is rich with content, and you’d have to be pickier than me (a professional critic) to not find something to love in its eleven songs. That’s a pretty hard feat to accomplish nowadays, but Douglas manages to make it look easy.

I would really love to hear the Gary Douglas Band possibly collaborate with additional musicians with a classical bend. These songs are already so stately and borderline symphonic in some places, and I think that if you gave him an entire orchestra to arrange you would end up finding that Douglas is one of the most cerebral artists of his time. It’s definitely a large scale undertaking, but then again that’s pretty much what this band has become known for since their inception.

As far as LPs go, it doesn’t get much better than Deep in the Water stylistically or conceptually, and you can apply its foundational layout to almost any genre of music and find that it still carries the same gravitational pull. There’s a very intense thought process that goes along with the creation of any record that Gary Douglas sticks his name on, and this offering in particular feels like it went under a lot of painstaking revision and refinement. The efforts were well worth the trouble, as the Gary Douglas Band have yielded one of 2018’s most intriguing new albums.

User Rating: Be the first one !
Share
Previous Alberta
Next Patiently Awaiting the Meteorite release LP