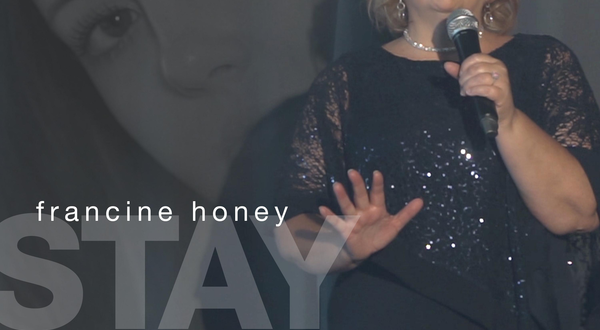 Sizzling yet smooth, perky yet pendulous, immaculate and yet still unvarnished and edgy – the guitars that dot the landscape of the new single “Stay” from Francine Honey are sonic duality personified. While they’re only one component in the emotional ballad from this singer/songwriter, they’re as formidable an agent of evocation as any of her words are, if not a bit more so in a couple of key spots. Sensuous string arrangements and vivacious vocal spectacles are what I’ve come to expect from Honey, and she delivers nothing short of her very best in this latest release, which I find to be the most robust in her increasingly diverse discography.

The vocal track is sewn into the instrumental melody seamlessly, but through the clarity provided to us by the master mix, we’re never confused as to where one element ends and another begins. The bass, the piano, the guitars, the drums, Honey herself – it takes every one of these ingredients to form the quaking catharsis that “Stay” offers, and never is there an instance where it sounds as though the players are competing for our attention. Their chemistry is off the charts good, and that’s not always the case with singer/songwriter singles of this type.

This mix is super physical in both the music video and the single, which initially took me by surprise. A lot of times, music videos will use a slightly different EQ than their source material did as to make the imagery we see the primary focus, but that isn’t the design of “Stay” at all. I get the impression that, much like the video, Honey never puts anything before the melodies in her music; in fact, quite the opposite. For as much talk as there has been about the plasticity of modern country and Americana, this is one artist who consistently defies the narrative with her uniquely original content.

The black and white filtration in the music video yields an interesting contrast with the instrumentation in “Stay,” as it’s perhaps the most colorful of any in To Be Continued…. The irony of the barren visuals being juxtaposed side by side with this blue-hued harmony wasn’t lost on me at all, and I don’t know that it takes a graduate degree in music theory to understand the wit in the construction of this piece. One can’t help but hope that some of Honey’s peers will follow the example she sets here, but then again, their lack of initiative is exactly what makes this track such a diamond in the rough.

I only found out about her work recently, but I’m very eager to hear more from Francine Honey in the future. “Stay” has a lot of angles to it, and therefor can be interpreted a number of different ways, but there’s a universally applicable tone to its lyrical narrative that most anyone who has ever held their own heart in their hands can relate to. She’s got a fire that I don’t see going out any time soon, and with any luck, this won’t be the only chance that I have to review one of her spellbinding serenades.