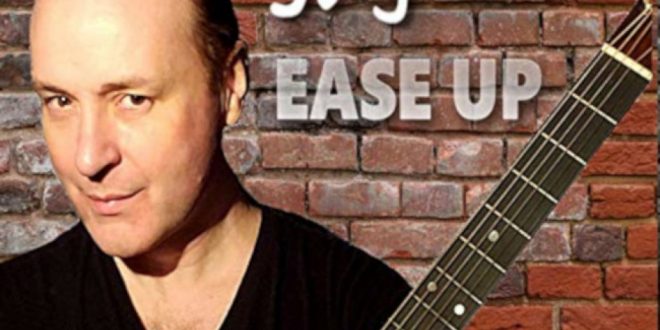 It isn’t very often that disciples of the folk, pop and country genres get together to celebrate the same record, and what it does happen, it’s a pretty big deal to say the least. That said, Ease Up, the new extended play from Jay Elle, is a record that qualifies as such a rare release – in the folky prose of the title track, the country strings of “Take a Holiday,” the AM pop polish in “Needs Fixing” and the amalgamative fusion ballad “By the Blade,” we find all of the necessary puzzle pieces to assemble a picture of modern American melodicism, and it’s as breathtaking as the country that inspired it. Elle proves himself to be one of the underground’s best active stars in his new EP, and it doesn’t take more than a cursory look at its contents to see exactly what I’m talking about.

The main focus of this record is undeniably the interplay between the guitar and vocal parts, but there’s also plenty to marvel at with regards to the percussion in “Never Dreamed (I Could Be the One)” and “Take a Holiday” as well. The drums frame the harmonies that the aforementioned components conjure up with a chic surrealism that makes all of the music feel so much more entrancing than it would have with a muted beat, and in “Never Dreamed (I Could Be the One),” the very narrative of the song is clarified through the reflective grooves that shadow every verse. If you’re wanting some layered singer/songwriter fodder this September, you needn’t look any further than this tracklist to find just what you’ve been needing.

Without Brent Kolatalo’s handiwork behind the glass in the title track, “Take a Holiday” and “Sickly Sweet,” I’m not convinced that the string arrangements in these songs would be nearly as engaging as they are with this pronounced mix. Kolatalo brings a wealth of experience into the studio with him, and it is only because of his astute approach that we’re able to experience the intimacy of Jay Elle’s music in Ease Up to the extent that we ultimately do. I would love to see them work together again – with any luck, their next project will be Elle’s first full-length album (which would be nice to hear within the next year or so).

After admittedly getting hooked on Ease Up’s magnificent material, I’ve become a lot more interested in seeing Jay Elle live. If even a fraction of the warmth that he has in the songs “By the Blade,” “Ease Up (Into Love)” and “Never Dreamed (I Could Be the One)” were to transfer onto the stage, he could accumulate a following that would put some of the best in this business to shame. I hope to find out for myself if he decides to embark on a full-fledged North American tour, and once this record starts to gain a little more steam on the college radio circuit, I’m sure that the demand for more Jay Elle will become so strong that live gigs will be a given in 2020.

User Rating: Be the first one !
Share
Previous Alex Lopez’s new album “Yours Truly, Me”
Next Lanny Paul