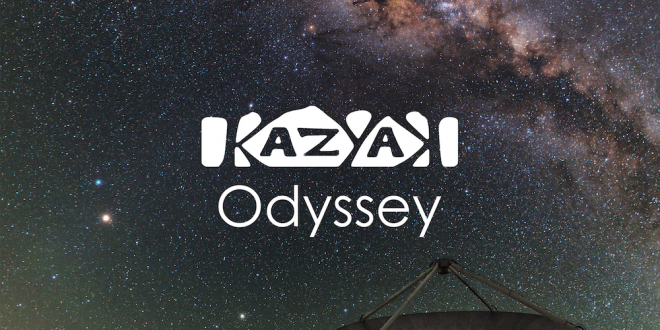 “Contravertical,” the opening track in Kazyak’s new record Odyssey, begins in a haze of distorted spoken word and synthesized clouds that churn into a solid harmony by the time we hit the forty-second mark in the track. The music drones forward with a confident ease, unraveling one note at a time, until we’re met with a stream of poetry that gives us a good sampling of what lies ahead in the next seven songs on the album. “Discover” kicks into gear as “Contravertical” dissipates into the ethers, and it immediately changes the pace to a more traditional flow of swinging riffs against the backdrop of a lush instrumentation that won’t calm down until we’re in the safe, comforting arms of the new wave-inspired “Paper Bird.”

Lost in a wilderness of harmonies, Kazyak carve out a patch of normalcy for us to cling to as the bizarre beats of “Paper Bird” wrap around us tightly, only to recoil inside its synthetic refrain every time the tension gets close to overwhelming us. Next to “Camouflage,” this song isn’t all that inventive, but then again, its successor in the tracklist is definitely one of the more stunning on all of Odyssey. There’s a muted assault beneath the layers of sonic mistiness, and at the right volume, you can feel the rumble of the bassline in addition to the roar of the instrumental melody behind it. This is definitely an involved listen if I’ve ever heard one, but it isn’t repellent to casual rock fans at all.

“Zombie Dream” tosses a dash of shoegaze into the mix before clearing out some space for “Smoke Jumper” to pummel us with its throttling grooves. I think that in order to really appreciate both of these songs, you have to listen to them in the order that they were arranged by Kazyak, who stop just short of making a flat-out concept album in Odyssey. They prove that they’ve got the chops to make something a little more operatic in the future if they were to see fit, but if I were in the position that they’re currently in, I wouldn’t change a single element in the formula that they’re working with here. It’s their ultimate sound, and they wear it better than anyone else possibly could have.

With the brief swirl of “Rocket,” we prepare for the grand finale in Odyssey, the immeasurably twisted sonic symphony “Be the Sun,” which reunites us with the ghostly echo of “Contravertical” for one last adventure into the far reaches of the universe. After seven and a half minutes of blistering musicality, Kazyak’s latest album comes to a conclusion, leaving only a trail of harmonies in the cold silence that follows. I’ve been listening to this band for a couple of years now, and while I had a feeling that this most recent studio outing was going to be something for the ages, I was still taken aback by just how strong an effort this LP really is. It’s another smash in a string of big hits for Kazyak, and possibly their most charismatic work so far.

User Rating: Be the first one !
Share
Previous In Other Words, the new LP from the one and only Paul Jacks
Next The Promised release new Music